So, how do you ask for a favor?

I suppose I was just confused why some commands were mixed in with requests, while the other imperative forms were left out. It sort of implied that those specific commands weren’t considered as such (at least to me).

Thanks again for your help!

I noticed a grammar point for てもらう suggested an alternative of していただきましょう and linked the politeness levels post that’s in this thread. But in that post, I don’t see ただき only ただけ. Is that a spelling mistake in the grammar point or another grammar rule?

The post above only seems to use いただく in potential form in questions. いただけませんか or もらえませんか are like “Couldn’t I have…”

Whereas いただきましょう is in volitional form, so I’m guessing you saw it in the sentence with (説明して) もらいましょう “let’s have you explain” or something like that?

Ah, yes it was a ‘let’s have you explain’ type.

Is there a specific page I can study more about this aspect to better predict these things or is it highly case by case?

The more I see these the more confusing it gets, and the example sentences often don’t appear (to me specifically) to clarify the difference, as I often just see (in my head): “do this for me” in a lot of sentences.
Is there a short way to explain the difference in use of: Do this for me; please do this; do this for someone; got them to do this?

Secondly, the politeness levels are always catching me out, I felt they are so similar but wasn’t sure why some are accepted as an answer and some not during a review. The big list above is very helpful to make that clear, but where is the ‘line-in-the-sand’ between Casual, Polite, Humble? (specifically for Bunpro answers, as I imagine its more flexible and nuanced in real life?)

Is there a short way to explain the difference in use of: Do this for me; please do this; do this for someone; got them to do this?

You might be getting stuck because you’re seeing the English words in your head rather than the concepts. “do verb for me” is a concept rather than “do”, “verb”, “for me” as separate concepts.

Another thing that really helped me is visualizing 1) who’s the subject and 2) the direction of action, like in this video: 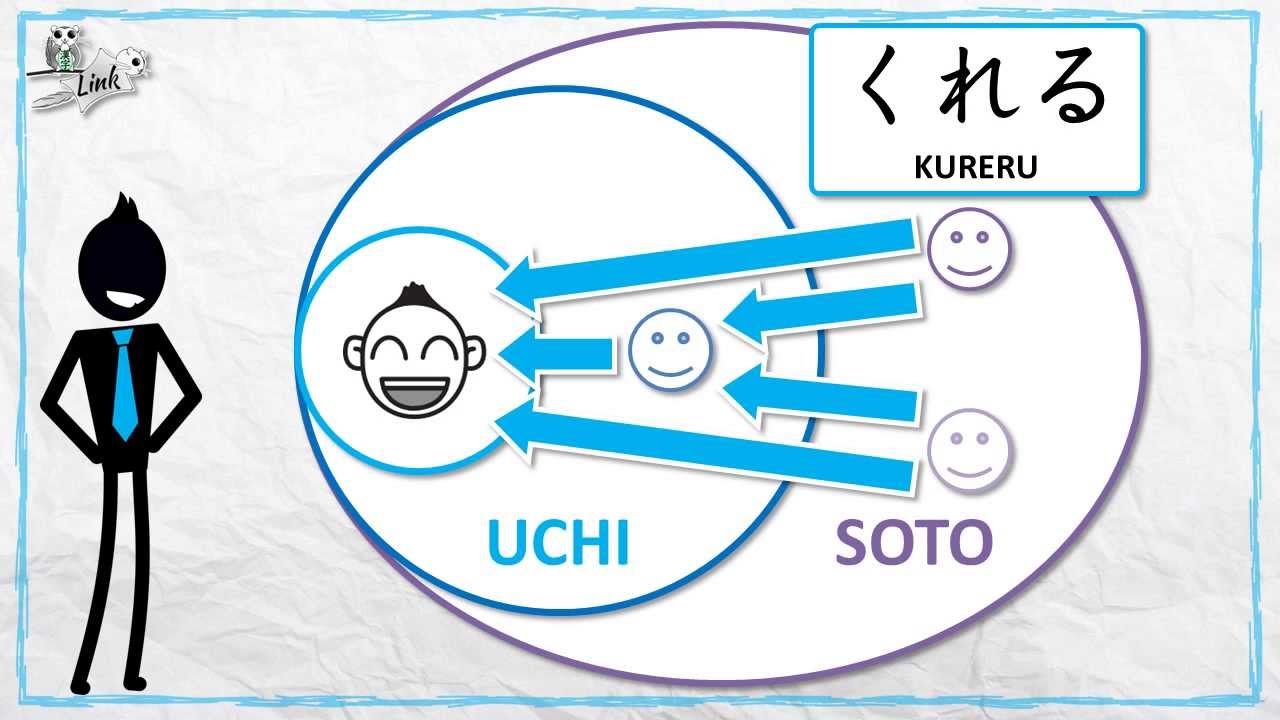 I definitely get the basic concept as presented through that video, I learnt these through the genki text book before adding to Bunpro list, and initially the reviews were easy. The problem arises with more complicated sentence structures and what appears to my inexperienced eye is that the English translations seem so similar to the point that they look like they are saying the same thing as another review sentence, but one base grammar point is くれる, and another is もらう (or てくれる/てもらう.
“can you”, “please do” and “do for me” seem to cross over a lot.

Then its a matter of working out where on that long list of versions of くれる/もらう it is to get the correct answer.

I think I know what you mean, but it might help if you posted here some examples where you wanted to guess something that Bunpro marked wrong. (I suggest using the Cram feature to quickly see examples in review format.)

I looked a little closer at the Bunpro sentences. These are patterns that I see…

てください is always a polite command – “Please do something”

てくれる？ is always a positive question, matching the positive verb – “Will you?”, “Could you?” – and there’s always [for me] or implied [for us] (because you give me something with くれる)

てくれない？ is always a negative question, matching the negative verb – “Won’t you …?” instead of “Will you …?”

てもらえない？ is “can I get you to do something?” – maybe this one is tricky, but if you break it down, because “I” am the subject instead of “You”, it’s asking something more like “wouldn’t it be nice if I can get the benefit of receiving this action?”, since the verb is もらう, the focus is on receiving the action (and the missing second half of the sentence is “hint, hint, you could do this for me”). Since it’s hinting (貸してもらえない？) rather than directly stating “could you get this for me” (貸してくれない？) then it’s a little more polite.

That’s what I’m slowly picking up on, after just trying to read up on this the last few days. I need to be more careful and precise with who the SUBJECT is for starters, as that will determine which action is happening, and then those finer point in the English of “will you” or “wont you” make a difference in how polite it is in Japanese (positive question or negative question). Then finally the “I get you to do” was tricky, along with the fact it also had multiple answerers (or so it seemed) with the てもらえな vs いていただけませんか.

The list up top helped but also confused things a bit. I think a “theoretical” line between were casual ends and polite starts, then another where polite ands and humble starts would have made things a little clearer (then keigo, “extra-humble” as bunpro puts the hint)

Boom. The above list with colors separating verb form.

(I’d also note that not everyone uses every form. Some is just preference.) 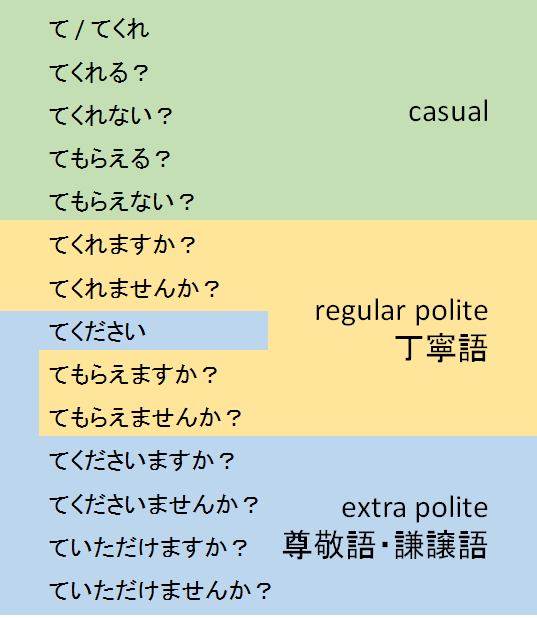 I guess i have that worked out now , but it would have helped a lot seeing this first. But now hopefully it can help others in the same situation (and also when i forget

).
Just read the subject, direction, and neg’ or pos’ framing of the question, really carefully.

From what I understand, 尊敬語 and 謙譲語 are just types of words you can find in any politeness level. (ie: ちょうだい is technically 謙譲語, but also very casual) and 丁寧語 is just a grammatical construction. So… how do you call the different “levels of politeness” like rude-language, casual-language, strangers-language and respect-toward-a-client-language. How would you call that in Japanese?

Oo. Challenge accepted! I’ll try my best to answer these, but others (@mrnoone @Jake) might be better qualified to give a precise answer.

くださる is the 尊敬語 honorific polite version of くれる. So when you say 話してください, you’re saying “[please] speak for me” in an honorific way. The way that Japanese is typically taught to English speakers, they usually just give a quick explanation that it’s a polite request or that you should just memorize it, but it actually has its root in humble keigo. Now, of course, it’s used so commonly that it doesn’t have as strong an impact as 話していただけませんか？ and technically you’re politely “commanding” rather than “requesting” so it’s not quite as polite.

I’m speaking specifically here about the verb form and vocabulary. Using the ます form is regular 丁寧語 polite . Honorific 尊敬語 and humble 謙譲語 use different vocabulary.
行きます — to go, regular polite
いらっしゃいます — to go, honorific polite
まいります — to go, humble polite
(Some train stations will announce 電車がまいります because they’re being humble about themselves to their customers.)

So, with business settings or formal gatherings, honorific and humble keigo (尊敬語 and 謙譲語) is just standard, just as you would hear “ladies and gentlemen” at gatherings that carry some formality.
And at restaurants and such, honorific/humble keigo is used as a standard but often the staff (especially younger staff) use the words as part of set phrases and immediately switch to regular polite when you ask questions to them. Restaurants are “serving” the customers and therefore have a lower status than the customer.
So both of your examples can use honorific/humble keigo. Yuta is being extra polite because his role as interviewer carries a different [lower] status than if he talked to someone without a microphone.

(I started typing a whole lot more but I realized that I was writing a novel, because there’s so much to explain that’s different from Western culture, so I shortened it and hopefully this is enough to get a foundation.

So… how do you call the different “levels of politeness” like rude-language, casual-language, strangers-language and respect-toward-a-client-language. How would you call that in Japanese?

Otherwise, I think the assumption from native Japanese is that casual is the baseline and anything else is a conscious effort, so they point out 丁寧語 / 尊敬語 / 謙譲語 but don’t point out casual language.
(Btw, I also think they’re used to foreigners speaking a weird, unnaturally polite form of Japanese, so don’t get stuck on any of this.

[Edit: 丁寧語 is a subset of 警護, but I didn’t learn it that way. I fixed my explanation to be more correct.]
[Edit: 下さる is honorific form of くれる]

So, if I understand well, it’s not correct to say that 丁寧語 is a subset of 警護?

Oop. I stand corrected. After a little research, I need to fix what I said before.
丁寧語 teineigo is a subset of 警護 keigo – it just wasn’t taught to me that way.
But, since the other two are more difficult to use, you really can’t go wrong if you default to 丁寧語 (except maybe in the eyes of linguist purists).

Yes this is super confusing because depending on the source, people include 丁寧語 or not as a subset of 敬語.

There’s a large amount of タメ口ドッキリ on youtube where people speak casually to someone to see if they’ll get angry, most of which are probably fake, however they are they interesting to see the way that people are supposed to be spoken to or expect to be spoken to.

I’m currently learning the てあげる/てくれる/てもらう triad, and after tripping over てあげてください and てくれますか for a bit, I’m wondering where てあげてください would be in your list. Same level as てください?