Are there grammar points with Japanese counters? If not are there any plans to add them in the future?

Counters are quite annoying to memorise and I think bunpro could make them easier to handle. They should be quite easy to add as well since they are not really that complicated and don’t require too much explanation if any. They are just painful to memorise.

If they will be added it would be nice to have separate category for them.

Hmm, I see what you mean but I see this as a vocabulary point more than a grammar point.

Also since there are so many (I would say as a guess I use around 25 on an everyday basis, plus there are literally hundreds more), I’m not sure it would fit the BP format particularly well, since they can’t cram them all into one grammar point, nor can they create separate grammar points for each counter.

I certainly think it would be a good idea to create one grammar point with the top 12 most used counters, but with a warning label saying that it is not an exhaustive list and that further study is required in order to pass the JLPT.

OR! Maybe one grammar point for each JLPT level with 12 counters in each… that could work…

I am not sure if you can count counters as something else than annoying part of japanese grammar.

In linguistics, a numeral (or number word) in the broadest sense is a word or phrase that describes a numerical quantity. Some theories of grammar use the word "numeral" to refer to cardinal numbers that act as a determiner that specify the quantity of a noun, for example the "two" in "two hats". Some theories of grammar do not include determiners as a part of speech and consider "two" in this example to be an adjective. Some theories consider "numeral" to be a synonym for "number" and assign al...

Counters are quite elaborated part Japanese numerals, but it doesn’t mean they are just vocab.

Because there is so many of them I would see them as a small section outside of N1-N5 system. There is no point in adding them all. Most of them are almost never used and even if so they tend to be rather regular so familiarity with most common ones should be enough to figure them out.

Testing 12 different counters in one grammar point would not work in my opinion. Knowing how to use counter 人 does not proof you remember let’s say 匹.

At very least there should be grammar points for counters you can not replace with つ.

Anyway you can’t really say you master grammar of any given language if you are missing the knowledge on how to use number properly in your sentences so it is quite strange bunpro ignores counters.

I would recommend that you add the counters to a vocab list on anki. For something to be grammar, it needs to affect the structure of the sentence relatively significantly. But counters just append to the end of the end of a number, similar to English. You must say ‘5 (boxes) of rice’, not ‘5 rice in (boxes)’. The only difference is that the counter word is split in English.

Japanese counters have very predictable 連濁 (pronunciation changes), so youd be better off making lists of which counters use which pronunciations/styles of counting.

This seems like an awfully harsh requirement to place on yourself.

=======
I would respectfully disagree with the idea that counters are strictly “grammar”, in Japanese specifically. (I believe you mentioned that you know other languages in another post, so I want to be considerate of that background.) Japanese words change meaning by some conjugation and some agglutination (adding on) of words/particles. It’s difficult to strictly separate Japanese words into “grammar” and “vocabulary”. At beginner levels, textbooks present Japanese words in that context because that’s what European language speakers are used to. But with more “advanced” grammar, you see things that blur the lines, like words that operate as nouns but have to be translated as verbs in English.

Simple example:
日本に行ったことがない。
Literal: There is no thing that (I) went to Japan.
Natural: I haven’t been to Japan.
– The way to say “haven’t been”, which is wholly a verb in English, is translated using two verbs and a noun.

(fyi - I grew up speaking English, I’ve studied intensively Japanese and Spanish, and I’ve dabbled in German and Korean.)

=======
Back to this thread’s topic, yes, Japanese counters are difficult, but there’s only a few that are weird (一人、二人、三人…), and you pick them up pretty quickly as you encounter them in conversation. The resources that I’ve seen have typically presented counters as vocabulary. On a practical level, there’s little consequence to not knowing all the counters: standard tests like JLPT only quiz you on a few of them, and when talking to Japanese people, they help you through it because they know it’s confusing. That said, probably adding a few counters to Bunpro in the future might be a worthwhile update.

Testing 12 different counters in one grammar point would not work in my opinion. Knowing how to use counter 人 does not proof you remember let’s say 匹.

I understand the point you’re making here, but as with the BP grammar point for the passive voice, there is a different verb for each example sentence (each with a different way of conjugating into the passive voice) and it is made clear that you should learn the vocabulary before adding it to your list. I’m saying that if BP were to introduce counters as a grammar point, this would quite possibly be the only feasible way of doing it, as I very much doubt they’ll be wanting to add hundreds of separate grammar lessons for each counter.

Yes this is right, but not only this… BP always lists exceptions on the lesson page, so you wouldn’t even have to go into the further reading section - you’d only have to look at the exceptions part.

That said, I still don’t think counters would work particularly well as its own grammar lesson on BP.
WK already has a large number of counters listed in their database, or as @Asher mentioned, you could simply create an Anki deck with more or fewer of them, just whatever works for you. I just can’t see it being its own individual grammar lesson.

(I believe you mentioned that you know other languages in another post, so I want to be considerate of that background.)

I said I am not native english speaker, but it is easy to notice without me pointing it out

I couldn’t be bother to try master it…

I would respectfully disagree with the idea that counters are strictly “grammar”, in Japanese specifically.

Depends what you mean “strictly grammar”.

Let’s have a look an “english” sentence:

This sentence conveys the meaning, but something is missing to make it grammatically correct. In eg Chinese grammar as far as I know (which is not far…) this kind of sentences are perfectly fine from grammar point of view. But in English you need to modify the sentence ever so slightly to make it into proper english: “He was learning Japanese yesterday for five hours.”. No meaning added.

Same situation we have with counters.

“私たちは１犬と１猫を飼っている。” Does convey the meaning and in many languages it would be fine, but in Japanese it is not grammatically correct sentence. Semantically everything is fine: just grammar is off . I believe it should be “私たちは１匹の犬と１匹の猫を飼っている。” . Not sure if “1匹猫” would be correct as well. It is a grammar problem.

Thanks everyone for an input. I hope one day you will understand you are wrong

But there is one thing I am sure all of us can agree: counters suck… They probably keep it in the language only because they want to be able to spot a chinese/korean spies before they will finish their first 10 sentences…

Considering that a native speaker would understand your sentence “私たちは１犬と１猫を飼っている。”, it isn’t an issue of grammar, it is an issue of the words you chose to convey that meaning. If all you are interested in doing is ‘being understood’, then you only have to worry about grammar. However if you want to sound the same way a native speaker would sound, that is where vocabulary will become important.

If that the case then sentence “He learn Japanese yesterday for five hours.” is grammatically correct when it is clearly not.

We kind of disagree over semantics with is not very useful.

I do agree that there is no need in mastering fully foreign language. I used to work in UK as a salesperson with english even more broken than now, and still I was doing well. And in this job your tongue is you main tool. So clearly beyond some lvl there is no utility in investing more time into learning more. We agree on that.

However thats is beside the point. Using the same logic we could for example decide to not make distinction between na-adjectives and nouns. After all everybody will understand what I am trying to say when I say something like "私の猫は綺麗のペットです。” I am pretty sure it is not grammatically correct but it does not change the meaning at all.

I simply believe that BP actually would do great with counter (being ask to choose proper one in the sentence will be helpful for sure), and it is within its domain (as grammar). If somebody will not want to learn them then they don’t have to add them to review and Bob’s their uncle

I would suggest we agree to disagree. Or main point of disagreement is semantics.

No it is not gramattically correct, because you are changing the form of words, the form that a word takes is indeed grammatical. By form, I mean past tense, present tense, present perfect, past perfect, etc etc. In your Japanese example sentence there are no tense issues, so there are no grammar issues. In your English sentence, there are tense issues, which makes it a grammar problem. When you use your example 私の猫は綺麗のペットです。It is a gramattical issue that actually does change the meaning quite a lot. You are saying that your pet is beauty’s pet. Not that the pet has beautiful qualities.

I don’t think it’s semantics, but I don’t want to get into an argument. So I’ll leave it at that. To get back to your original question, I really do recommend that you make anki decks for the counters. That’s what I did for most of them.

I already do so

ps: It is semantics: we disagree on what word grammar really means. And it is fine. Grammar does not have clear definition anyway and we will not make any progress in clearing it out:

grammar: the whole system and structure of a language or of languages in general, usually taken as consisting of syntax and morphology (including inflections) and sometimes also phonology and semantics. 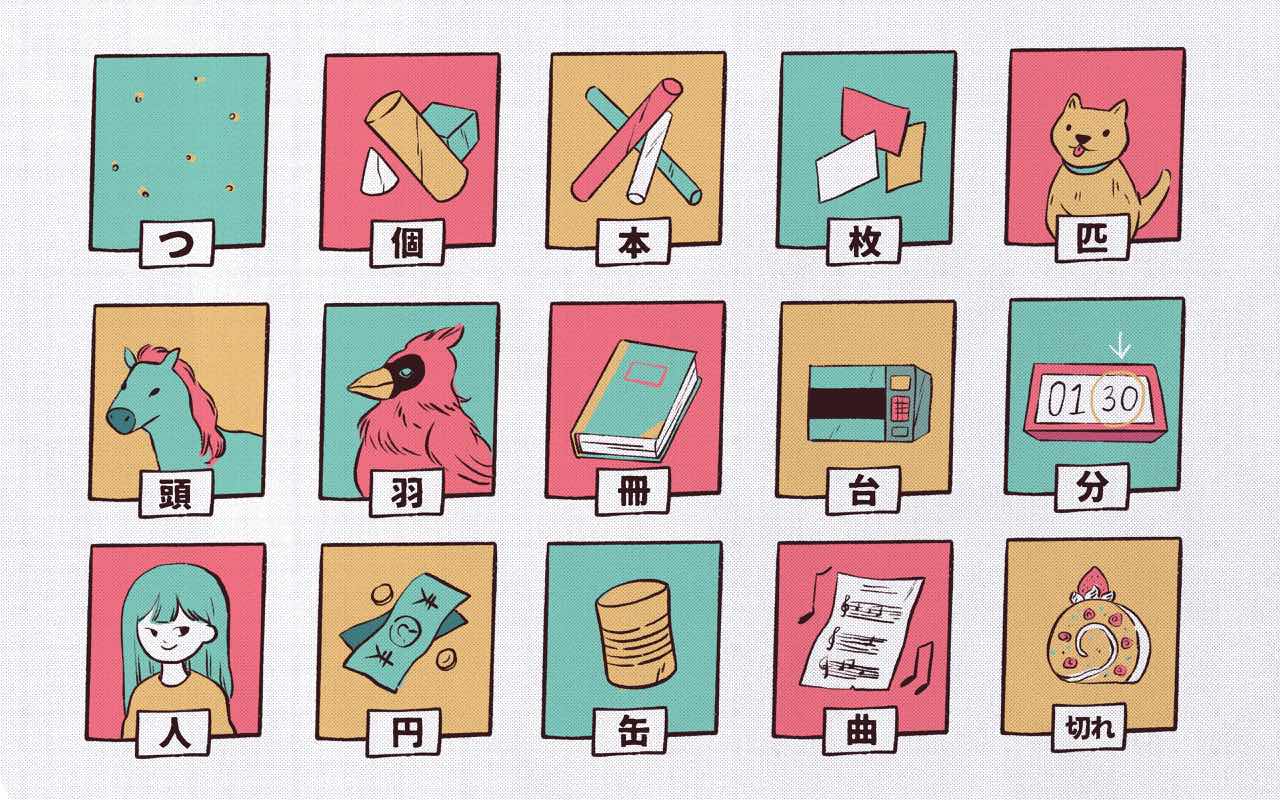 We've put together a list of 350 Japanese counters grouped by usefulness. That way, you can learn the counters that get used most often.

Just a neat link from Tofugu about the most commonly used counters. Maybe that helps in the mean time

Thats helps a lot. Thanks