How to know what the kanji reading is?

With most kanji there are multiple readings. How do you know what the reading is when you see it in an unknown word?

Short answer - in a lot of the cases you can’t…

But there are ways to guess with a very high probability.

With just this rule you will be able to guess the reading in ~95% of the cases.

Also, as you learn more and more words you will get a feel for what is the most likely reading in each particular case and will easily be able to guess the reading even for completely new words that don’t even follow the standard rules. Though, you will still encounter exceptions which don’t follow any logic what so ever and in those cases there’s no other way but to just learn them individually (e.g. 海老, which you’d think is read as かいろう, but it’s えび).

Kuromaku’s post already descrbes the main way to guess the reading. I just want ta add another one that works quite consistently.
If the word is a kanji compound dealing with a body part, it almost always uses kun readings for the individual kanji.

Thanks, for the tip. The more I read, the easier it will get.

生 will be fun to guess.

Yeah-- many times, it’s a guessing game, cycling between the possibilities until you find one that matches the okurigana, or, if you’re dealing with several kanji in a row and your vocab is good, find a reading that matches a word you already know.

This isn’t helped by the fact that there’s high variability in how okurigana is used. As a fun “official” example, 立ち入り禁止 is often just written 立入禁止 but read the exact same way: たちいりきんし.

The “real” answer is basically that you just have to study vocab like it’s the end of the world, and it’ll naturally start coming to you more and more with time.

Semi-related, I was reading an interesting section of the Wikipedia article for the written japanese language, and they confirmed a suspicion I’ve had ever since I’ve started studying this language: When someone reads a kanji, they kind of “store it in superposition” in that the kanji is like a quantum wave function

It’s using all possible readings at once! And then as you move further in the text, what reading the kanji actually uses there gets “collapsed” in your mind, so there’s an almost retroactive-comprehension aspect to reading because of that.

It’s whatever reading I decide it is when I’m reading.

all those 大, 人, 入 to this day I confuse them all te time if trying to read a word I dont know.

When I was in Japan I lived in a sharehouse, I met one of my best Japanese friends Kazu.

He really likes to buy all sorts of alcohol to try and share with everyone (I lost count how many varieties I tried thanks to him), and one of those bottles had a name with very simple kanji, but I’d never see them combined like that. Sadly, I don’t recall the name right now.

After trying to figure out a reading on my own, and failing, I just asked him:
ね、これ、どうやって読む？

Kazu tries to read the bottle and falls silent for a few seconds, then replies:
作った人に聞いて。

I lol’d. There’s no rhyme or reason to the overall use of kanji, much like in names, so like everyone here has mentioned just do your best to make a good guess and pray.

I’ll add that it’s also interesting to notice when onyomi or kunyomi are used, because it’s related to whether the word came from Chinese or Japanese. I’ve noticed basic ideas (猫、犬、山、川) or very Japanese concepts (建前、本音) usually use the kunyomi, while medical or philosophical words usually use onyomi. Basically, would you talk about it in everyday conversation or not. 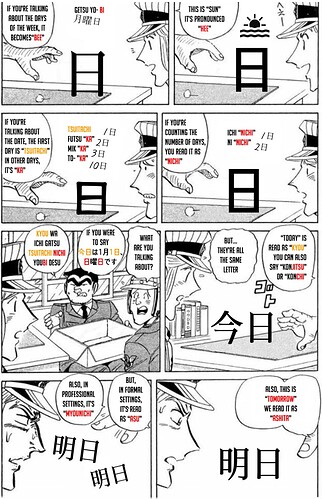 I have come to think of kanji a bit like this —

Imagine we wrote words in English using combinations of emoji. When you see

on its own, it’s pronounced “water”. In some compounds, like

🛝 (waterslide) it is still pronounced “water”. But sometimes it’s read “hydro” as in

(hydroelectric). Or sometimes “aqua”. Like kanji readings, these alternate readings even borrow from other languages, in this case Greek and Latin.

I applaud that analogy. Very clever!

This is “2”. It’s pronounced “two”.
When it’s followed by “nd”, it’s read “seco”, and when it’s followed by “.” it’s read “second”.
In short messages or online, it’s sometimes read “to” or “too”, or rarely as “r” or as “!”.
When spelling phonetically using the ITU alphabet, it’s read “bissotwo”.
In mathematical terms of the form n^2, it’s read as “squared”.
It’s sometimes also written using the older symbol “II”.
“12” is read as “twelve”, but in less formal settings it can also be read as “a dozen”.
The year 2022 is the two thousand and twenty second year of the common era, and read as “twenty twenty two”.

Its basically entirely dependent on the word. Learning Kanji readings is useless

This I do not agree with - there are useful kanji readings to learn for most kanji, which are going to be the correct reading like 90+% of the time.

I see what you mean, but when you learn enough words, (at least in my experience) you get exposed to the major readings. Then you get the natural sense of how a word is read, even when you don’t know it.

Indeed. Learning vocabulary (esp. a diverse vocabulary that reflects all of the major readings of kanji) is a great way to learn the readings. That was the approach I took. I added cards to my Anki vocab deck based on the various readings of kanji as a means of learning them. Kills two birds with one stone.

Learning vocabulary (esp. a diverse vocabulary that reflects all of the major readings of kanji) is a great way to learn the readings.

This is why WK has vocab cards for each level

I wouldn’t say that learning the readings of kanji in a vacuum is useless, per se, but you’ll accomplish most of the same objectives and a little extra if you just study vocab instead.

However, the usefulness comes in when you run across compound terms that you may have never seen before. This is especially true in the event that you’re better off in phonetic vocabulary than you are in literacy-- Knowing how something sounds even if you’ve never seen it before can be a big help, and eventually you’ll have to wing that sort of thing, especially for proper names, both of people and inanimate things. The kanji will typically tell you what the term itself actually means (at least kinda; there’s always the problem of several conflicting interpretations), but it’ll be harder to hold onto without a sound for it in your head.