One thing I have found limits my freedom of expression when speaking Japanese is that I don’t know enough idioms/sayings to replace more direct expressions, in the same way that we often do in English (examples). I have decided I must fix this chink in my armour.

There isn’t a thread about this topic already (as far as I can see, sorry if there is and please delete this one) but I think it’s discussion worthy - I am curious to know, how did you guys pick up different turns of phrase in Japanese, particularly ones which don’t translate well to English? Do you think it’s an important aspect of the language to develop (relative to say, 擬声語/擬態語), and has a grasp of common idioms in the language helped your conversational abilities?

Please feel free to add any 慣用句 that you like/find interesting; any useful resources in this vein are much appreciated as well

If interested, I put out this deck a last year. The audio and Eng->Jp has helped me naturally get more of these out in conversation. The book is good but I have focused more on the deck thus far (but the book has nice and longer dialogue passages). I added known proverbs outside the book as well.

PS: Happy to add more if not included already (and if common enough)

I’ve been hoping for a miscellaneous non-N section for a while as others have mentioned above. For those interested and members, I published an expressions/idiom companion deck in Kitsun recently based on the title book of 180 common expressions. I’m using Kitsun’s dictionary build and productive input features+ key expression audio and book has the full conversations for context (with audio) so I encourage both for those interested. I attempted to give notes on context for necessary items as we…

I use the app imiwa on iPhone, and that has practically every idiom and yojijukugo that I come across. I started a list of the ones that I’ve seen (but I haven’t added it to my SRS yet).

I find them really interesting but I don’t really use a lot of sayings myself, except for a few common ones like サルも木から落ちる. I’m still trying to focus on building up my vocab and grammar. But I think they’re fascinating – both 慣用句 and 四字熟語 – because of the images they portray and the way they pose certain situations that give insight into a “Japanese” way of looking at the world. Some of them are useful for getting used to the formal/written/archaic style of Japanese. They’re also interesting in the way that fairy tales and legends provide certain common morals – even if they’re not spoken all the time, those images still provide a background to understanding current situations.

It turns out I have a few resources that I bookmarked and forgot about.
Proverbs, idioms, 四字熟語 and and some sort of fortune telling thing, also has need to know lists based on school level: https://proverb-encyclopedia.com/
A proverb databse: http://sanabo.com/kotowaza/
A 四字熟語 database: https://sanabo.com/words/
四字熟語 and 慣用句 matched to wanikani level:
https://community.wanikani.com/t/one-yojijukugo-four-character-idiomatic-compound-for-each-level/32878
https://community.wanikani.com/t/one-kanyouku-idiomatic-expression-for-each-level/32971
Also found an onomatopoeia website with pictures to match the word: https://onomatopedia.jp/words/becha-becha?tab=target-tab-link-01
Which has youtube videos for certain onomatopoeia: https://www.youtube.com/channel/UCJ04BlPiUf23OWOEpe3csqg/videos

There is this channel as well:

ようこそオノマトペの世界へ！私の名前はひときです。僕のチャンネルでは、日常生活の中で使われるオノマトペを映像と音を使って紹介します。オノマトペを理解することで、外国語では、言葉に表せない繊細な世界を楽しみましょう！もしよかったらチャンネル登録をお願いします。 Hello everybody to the world of Japanese onomatopoeia! On this channel I'm introducing onomatopoeia used in everyday...

Hey Fred, thanks for the response. I agree, perhaps a strong arsenal of 慣用句 is not essential to fluency, but I can imagine it helps a lot.

Funny you mention 四字熟語, they are even more interesting/esoteric than plain old 慣用句 due to the 4-character limitation, and I too have found that decoding them provides a view into innately Japanese perspectives. Not to mention, they are used prominently in Sumo promotion speeches!

Maybe I should change this thread to 慣用句 and 四字熟語…

Perfect! I’ve been collating my own selection of 擬態語/擬声語, but this’ll help a lot! Thanks.

I agree, perhaps a strong arsenal of 慣用句 is not essential to fluency, but I can imagine it helps a lot.

I am not so sure about it. Idioms are at heart of any given language (Esperanto is exception but we can ignore it). Many grammar point are essentially just that.

“Mastering Japanese without it is not going to fly, but maybe you will be able to get them on the fly. And this is not fly a kite, just your comprehension will fly apart without idioms. There is no reason to fly in the face of that simple truth of nature.”

Don’t take quoted part too seriously. I just wanted to show how common idioms are. All expression with “fly” are idiomatic but we are so use to it that we don’t see them that way anymore (maybe expect fly a kite - I just find it in dictionary). Some dictionary even don’t list “going to fly” as idiom because this expression is very common in many languages.

From my experience I have found that the frequency of idiomatic phrases are generally lower in day-to-day Japanese than in English, but I am curious if others disagree

That’s surpassing information for me. Japanese looks very idiomatic. They seems like they like to speak in metaphors.

From my experience I have found that the frequency of idiomatic phrases are generally lower in day-to-day Japanese than in English, but I am curious if others disagree

It would be great if somebody could elaborate on that view. I couldn’t find anything definitive on the web.

For those reasons I would expect Japanese to be fill to the brim with idioms and common metaphors. Can anybody expands on that?

But on other hand there is also opinion that Japanese structure are extremely logical when you stop thinking about it in comparison to English. And I tend to agree on that one.

@bleloch if you consider it spam here, I can move it to new thread.

I can say the link that I shared above, all those expressions are all highly functional in a modern sense and would put it at an intermediate level or above (added common proverbs too, which are probably more written than spoken and perhaps less common). I think it really depends on the situation and the speaker, much like English, and the types of casual conversation you are listening to find the frequency. However, I wound not start just studying random expression lists which could be a complete waste of time. There are so many that are not common or out of usage so would encourage having something filtered through a native before putting any effort. I’d probably put 四字熟語 at the bottom of my list too, unless known to be essentially common and practical as many are not (probably depends on the subject matter you are reading too). This is definitely true for English for out-dated idioms, there are many just in US alone, I imagine many others in native-English speaking countries.

However, I wound not start just studying random expression lists which could be a complete waste of time.

That seems to be true about anything other than beginning of n5 vocab. It seems to be always better to learn stuff you encounter in reading or other usage of the language. Nobody ever learned to speak in colourful manner by reading list of rare words and expressions.

Unfortunately idioms are not on my plate yet

That’s surpassing information for me. Japanese looks very idiomatic. They seems like they like to speak in metaphors.

I agree that a lot sounds very “poetic” when translated into English but a lot of that “poetry” is just standard grammar so it doesn’t sound poetic in Japanese. (To me, Japanese poetry is a whole other level of hard!)

In my experience, descriptive simile – such “quick as a fox”, “light as a feather”, “sharp as a tack” – is used less often in Japanese than in English. But idioms like “the early bird gets the worm” or 「善は急げ」 are used just as infrequently in English and Japanese. But of course, like @s1212z said, some people use them more often than others.

Japanese language can be very descriptive and detailed but the culture is very indirect, so people tend to say less detail, rather than provide more detail in an indirect way (metaphors, idioms, simile). The assumption is that you will fill in the blanks or ask questions as needed (while still politely avoiding conflict).

I agree that a lot sounds very “poetic” when translated into English but a lot of that “poetry” is just standard grammar so it doesn’t sound poetic in Japanese.

I see it the other way around. As much as I can I try to understand everything in Japanese directly. After translation it is broken English or just normal English. Nothing poetic about it.

Easy example is how Japanese people use their grammar to describe some action/behaviour/state is better than another or worse. English use simple description: “This is better, this is worse”. Japanese pack the whole action as a “way of being” and then make statement about it as if that would be normal thing, just jet another ordinary noun. As an outcome you get sentences like: The way/road/path of not eating ice cream before dinner is good.

Granted: growing up in such an environment will make you not see it, but if you think about it you can feel Shinto and Buddhism all over the place. Our languages are rather influence by classical philosophy where we try to use language as a tool to make objective observation. Japanese seems to carry more spiritual/animalistic baggage.

Edit:
I believe it will be useful to clarify what I mean by “poetic”: 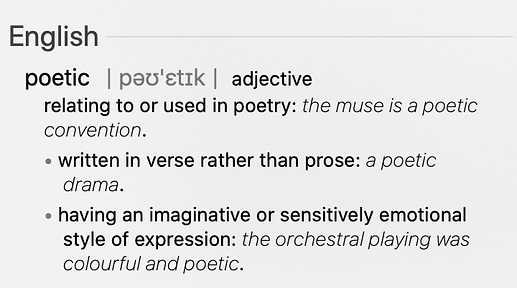 I mean it in the way described in the last definition. Otherwise it would be hilarious claim xD

I’ll also add a thought, that Japanese culture puts more importance on politeness than modern western cultures. The fact that there’s so many levels of politeness indicates that the culture treats the idea of respect with more nuance. So it’s true it’s sorta “poetic” (not concrete), but it’s also a way to be polite by being indirect.