Does anyone has know of any anime/shows that are fairly similar in difficulty to Teasing Master Takagi-San? I’d like to keep to slice of life and I’m assuming that anything outside of that genre would be more difficult anyways. I’m also open to podcasts, I’d just need the podcast to have its script uploaded, and I’d prefer the speaker to have a Tokyo dialect.

What I’m wanting to do is basically take a show and break it up into 3-5 minute clips and listen to it 5-X amount of times, try and comprehend has much as I can, then switch over to watching with Japanese subs and repeat the same process. I’d do this until I feel like I’ve picked up everything I know - and then switch to looking up anything I don’t know, study that for a little bit, and go back to listening X amount of times.

I’ve done this in the past with a program I found, and my listening improved quite a bit, but I’ve put off finding my own material for it since I felt like anime would be too hard. However, I feel like I’m at the point to where I can do this with certain anime. I’d like to do this with Teasing Master Takagi-San since this is probably the easiest show I’ve come across, but I’ve already studied it and watched it too many times so I feel like it wouldn’t be the same since I know a lot of what’s going to be said, etc.

I’m considering Shirokuma Cafe (or Polar Bear’s Cafe), but I’ve also watched this show several times - I just haven’t studied it yet like I have with Master Takagi-San.

Any recommendations? I’m pretty much open to any anime as long as it’s slice of life.

That’s a very nice strategy you have there.

As for recommendations in slice of life, that are easy, and don’t loose context with clipping, I’d recommend Lucky star of top of my head.

Thank you for the recommendations.

Also, I can’t claim that strategy as my own. If you know who Olly Richards is, that’s how I came across it.

As long as it works for you that’s all it matters!

So I checked my log of Japanese and a few more that are on the easy side but a bit higher level than the two previous mentioned:

Other genres if you feel adventurous:

That should get you going for a while.

I enjoy listening to 日本語コンてっぺい先生, A really amusing podcast covering a wide range of topics and various levels of Japanese ranging from beginner to advanced depending on what episodes/channel you choose to listen to. The best thing about listening to Teppei’s podcasts is that it sounds really natural and almost like you are talking to a good friend just blabbering on, and it does not turn stale and give you classroom vibes as many other podcasts do.

I believe a wordlist for each episode is available through his Patreon if you feel that it’s essential + he’s from Tokyo.

Bananya is pretty simple though not much dialogue. I’ve also thought about watching Meow Meow Japanese History but I can’t attest to it’s difficulty.

Usagi drop is probably about the same level as Takagi and also a slice of life.

Is a bit on the hard side with the camping specific language.

Is a bit on the hard side with the camping specific language.

Ah, was it? My apologies, it’s been well over a year since I saw it and I remembered it being relatively easy

It’s not that it’s a lot harder, but it’s certainly not in the same level.

You also have the dialect they have going sometimes, that might not be best for listening practice or ease.

You also have the dialect they have going sometimes, that might not be best for listening practice or ease.

Ah, that’s right… They did have dialects didn’t they? It’s been too long and I didn’t remember a lot from it, just that I didn’t “struggle” too much going through it, so thought it was an easy one

I recommend Yuru Yuri. It has 3 seasons and a couple OVAs. If you want an even easier anime, Amaama to Inazuma is hard to beat in terms of easiness.

Thank you everyone for the recommendations.

I was thinking of studying this, but when I watched the first time I felt like I pretty much understood most of what was being said, so I didn’t think it’d be worth re-watching and studying it in depth. Plus I saw how the manga ended and now I can’t un-see that.

Yeah, @Megumin recommended this and I took a look and since I haven’t seen it before I think it’ll be perfect. Thank you.

If you know something from the current season, I recently checked Senpai ga Uzai Kouhai no Hanashi, and seems to be also on the easy side, and also slice-of-life.

The open seas are vast and wide my friend. 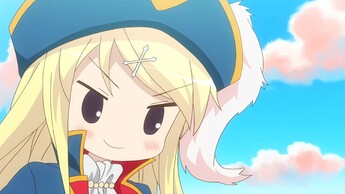 This is very true, although for some reason I’m not a huge fan of exploring these open seas

when it comes to new anime.