Names of sealife in Japanese

So a couple days ago i started researching different fish names in Japanese, because what else is there to do on a saturday, right!?
The reason being is i want to create a series that explains the meaning behind the Kanji and some of the lore attributed. So i was looking for a bit of help from anyone on here who maybe a bit more knowledable than me

So for example,鯰(なまず) is a typical word for catfish but in old japanese also meant the word for earthquake! The reason being, that fisherman had noticed that catfish were very agitated in the river before earthquakes struck. Which where the myth of the 大鯰(おなまず), of a giant catfish underground that caused earthquakes!

イルカ is the word for Dolphin typically written in Katakana, though 海豚(いるか), is far more interesting as it’s seapig. Which isn’t unique to Japanese as porpoise essentially means the cross between a pig and a fish.
Also if i’m misled or uninformed on anything, please don’t hesitate to correct me as i’m always happy to learn and i look forward to reading any interesting facts that are posted here

Slightly unrelated to your post, but I was planning on going to the aquarium here sometime this month and now I’m wondering if there’s anything you’d like me to take photos of? Either descriptions of the animal, kanji, etc. Happy to help out any way I can!

so one thing i’ve noticed is that fish generally have the radical 魚 in their kanji eg. Shark is 鮫, Koi is 鯉 and Tuna is 鮪. So any signs in Katakana or lacking the 魚 radical i’d be really interested to see, as i think they would have an interesting backstory. Would be amazing thank you! Also any penguins.

You got it! Apparently the 海遊館 has 3 different types of penguins so it shall be your (and mine too!) lucky day. If you think of any other tidbits or things you’d like to see feel free to let me know anytime

Here are a couple that I think are interesting in regards to the radicals they are made of:

鯨「くじら」＝ whale. Made up of 魚 radical (fish) and 京 radical (capital city; but it also meant big or strong in ancient Chinese)

Another interesting one is 烏賊「いか」= squid. The first kanji means crow, and the second means burglar. I read that this comes from an old Chinese legend where a crow came to pick at a squid that was pretending to be dead, only to be eaten by said squid. But I don’t know if that story is actually true.

I just went to the aquarium at Shinagawa station.
Can you give some penguins. 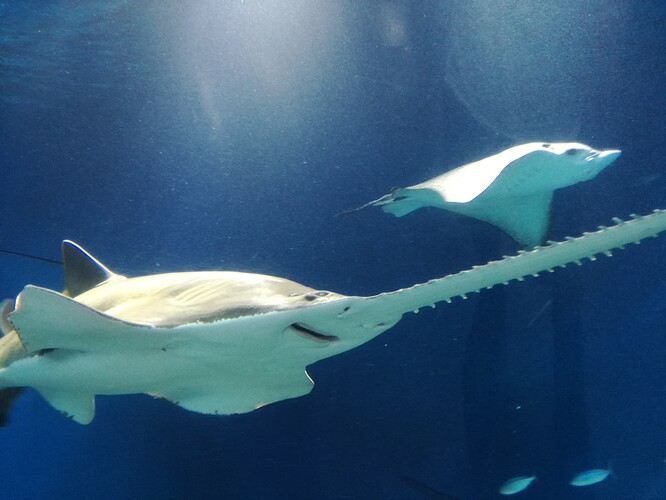 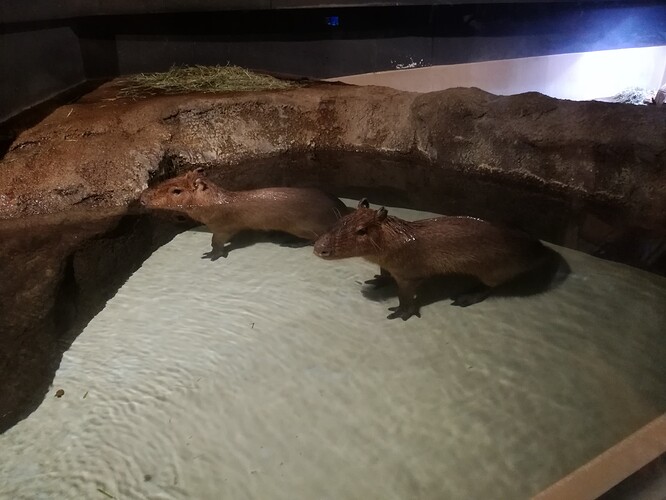 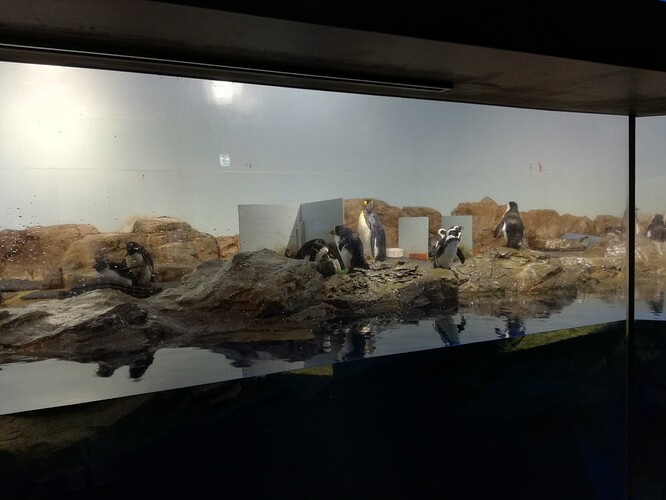 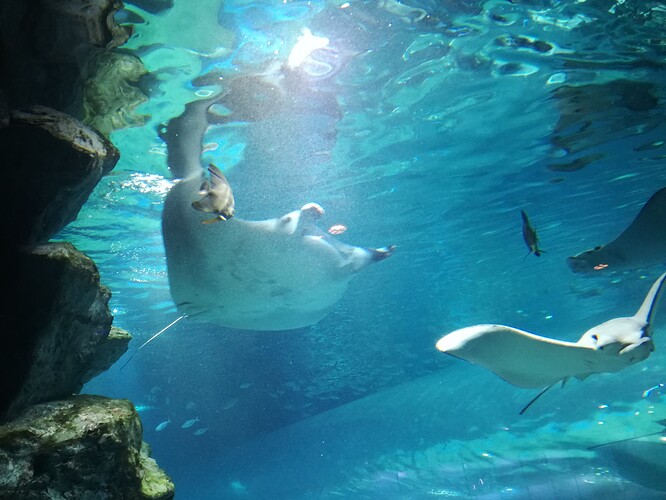 Here are some fish that don’t use the fish radical:

河豚 (lives in rivers but sounds like a pig, according to ancient Chinese people) フグ

This is probably a readily available list, but about 2 years ago now, a lady that I used to teach English to sent this to me when I asked if she knew any non-joyou kanji I should learn… Safe to say I didn’t learn them all… But I did learn a few 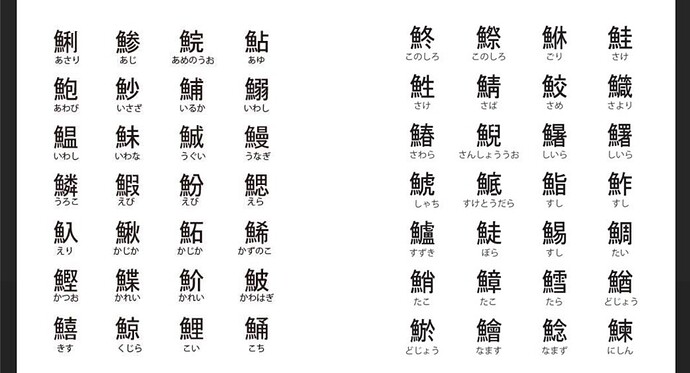 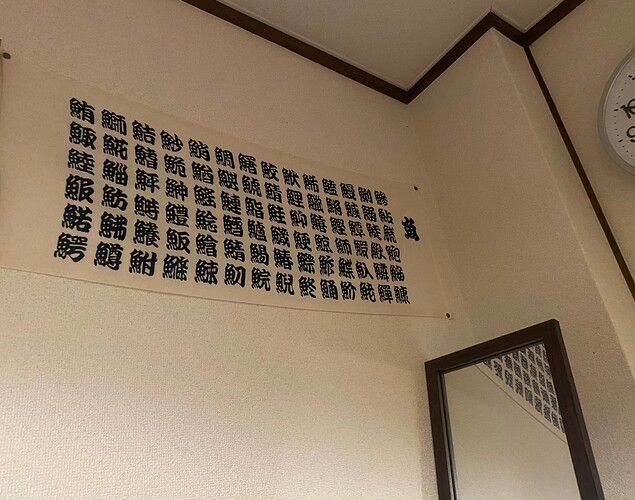 Thank you so much, im certain i’ll think of some more in the next few days!
Thanks so much everyone for the Kanji lists, stories and big lists of Kanji with Hiragana, so much to read up on and amazing photo of the saw nosed shark!

I’m wondering if there’s anything you’d like me to take photos of?

Kidding of course… Or am?

Nah, I am kidding though.

Hi me again, so i’ve been trying to read texts most of the night to no joy so i’m hoping someone here maybe a little more knowledgable!
珊瑚(さんご) is coral and find it really strange how it’s written. 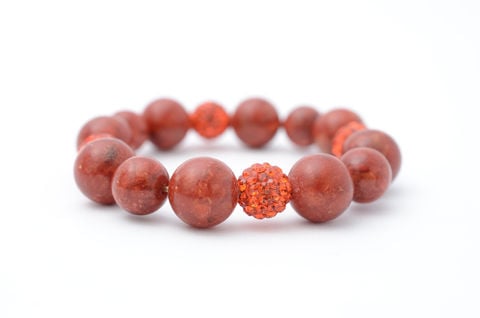 So the second kanji is “ancestral offering receptacle”, which seems to be these beads. Also it seems Japan used to import their coral from Spain or maybe the other way around?
Does anyone have any stories or knowledge on this subject?

Didn’t have enough time to read this thoroughly before leaving for dinner, but quickly opened up my kanji history dictionary for these two. Hopefully there is a bit of an answer in here. Btw may be a bit dear, but a proper 漢字源 dictionary is invaluable sometimes. It’s just hard to find this stuff online. 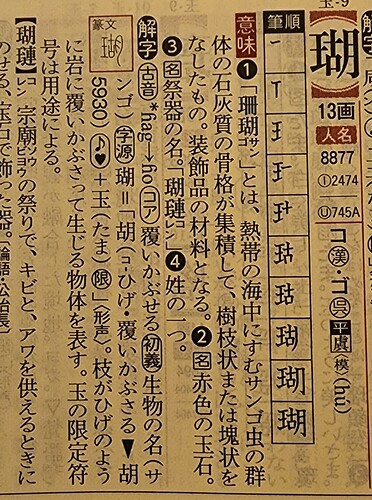 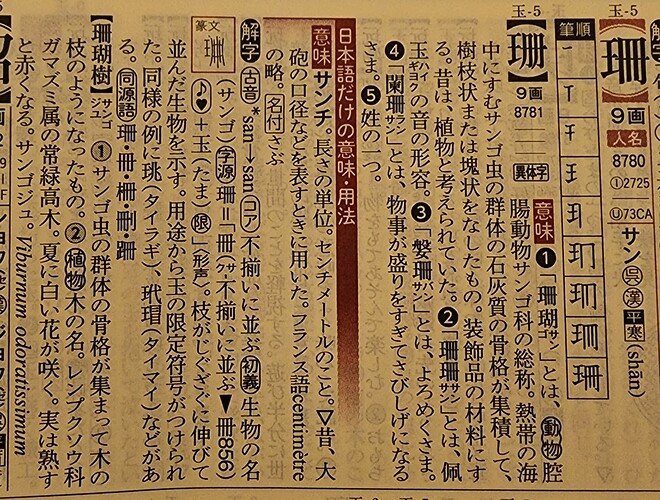 Oh wow this is awesome, thanks for this! What’s the name of the dictionary please 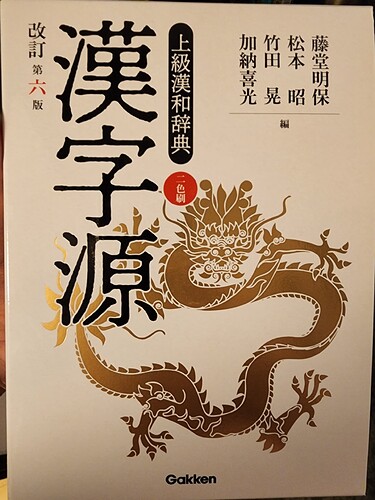 From memory it has about 14,000 kanji, including their historical info. I usually refer to it when I can’t find something online quickly, or when I just want a bit more info on some random new kanji I’m learning.

100% would recommend, as it is something you’ll probably only ever need to buy once if you take care of it. Was about ¥4000.

It was a gift from a colleague years ago, so I’m not sure. I really treasure it, though.

Here’s a new one, the samurai crab or the Heike crabs (平家蟹), named after the Heike warriors. Due to the face on the crabs looking like a samurai are believed to be the reincarnated spirts of the samurai who fell in the battle of Battle of Dan-no-ura The Battle of Dan-no-ura (壇ノ浦の戦い, Dan-no-ura no tatakai) was a major sea battle of the Genpei War, occurring at Dan-no-ura, in the Shimonoseki Strait off the southern tip of Honshū. On April 25, 1185 (or March 24, 1185 by the official page of Shimonoseki City), the fleet of the Minamoto clan (Genji), led by Minamoto no Yoshitsune, defeated the fleet of the Taira clan (Heike). The morning rip tide was an advantage to the Taira in the morning but turned to their disadvantage in the afternoon. The...