Why is なければいけない wrong in this sentence?

Now, I know bunpro was asking about なくてはいけない but my first instinct when seeing this was to enter なければいけない so I did. When I entered it I remembered it probably wants to read the other one from me, but I was curious what the website would say if I entered this, so I hit the enter key and it was straight up wrong.

I did not expect that, I thought maybe it would tell me something like: “Can you say it in another way?”

Why is なければいけない straight up wrong? Does it not have the same meaning as なくてはいけない? Maybe a slight difference in nuance? Can anyone explain that to me?

Again if you notice in the context box [long form て + なる ・casual] it explains exactly what it is looking for.

As far as the exact nuance in difference it is hard to elucidate.

The difference between しなくて and しなければ is something like, “not to do” and “if not done.”

So your answer is more like:
“if not done, cannot go”
なければいけない
vs
“not to do, does not become.”
なくてはならない

It is clunky as a transliteration but it helps clarify the nuance. For something like a statement about habits, conditionals like ば don’t make as much sense.

Especially the use of a relative time word like 毎日 helps to clue into that nuance.

Again if you notice in the context box [long form て + なる ・casual] it explains exactly what it is looking for.

Again, I know that. I know what the question is looking for, that was never in question, neither here nor in the other one.

In this question I want to know why しなければいけない is considered “wrong”.

When reading the explanations of the both grammar points, they even straight up say they mean the same.
Quote from the Information tab of なければいけない

“Like なくてはいけない, なければいけない is a structure that implies that something ‘must be done’.”

It’s even listed under synonyms!

So, knowing fully well that this question is asking for なくてはいけない, I decided to enter なければいけない to see if it was also correct, considering the website told me it means the same.

Like I said: I was expecting it to tell me: “Can you say it in another way?” like with many other grammar points, I did not expect it to be straight up “wrong”

If the only difference is a slight nuance, that is not even explained in the grammar point, then I don’t think it’s fair to just have it be “wrong” to enter this, rather than say: “Looking for another version here.” or “it’s a different nuance”.

I have no intention of being antagonistic. I apologize if it came across that way.

I also personally think that these lessons need to be restructured and given some care as I personally struggle with then a lot.

As I see it there are two issues here.

You are not wrong to feel frustrated with this grammar point. It is one of the examples where English has simplified into word a concept that takes Japanese 10 different variation. It’s naturally hard.

I do really apologize for callousness experienced. I have nothing but sympathy. If other members of the community have recommendations for how Bunpro can teach this topic better, and aid new learners in its expectations I would much appreciate it.

I must have misinterpreted what you said. A downside of pure text communication is that tonation and facial expressions are absent ^^

No sweat, no harm.

Yeah, I guess this is just something that one has to naturally pick up via seeing and hearing the context in which it’s used. Well I’ll just keep on keeping on

I’m gonna try again, with a new link, pasted in the right thread. Not exactly the same grammar formulation, but the genral difference betweeen naranai and ikenai. Hope it helps.

You said a few times that you know what the question is looking for, but…it looks like you actually got both parts wrong; or at least, not exactly what Bunpro was steering you towards.

It asks for “Te” form, not “Ba” form for the first part, and then what’s actually tripping you up is that the question is looking for “naru”, not “iku”, for the second part. You even said in your initial post “I know bunpro was asking about nakute ha ikenai”, but it’s not - it’s asking about “nakute ha naranai”. 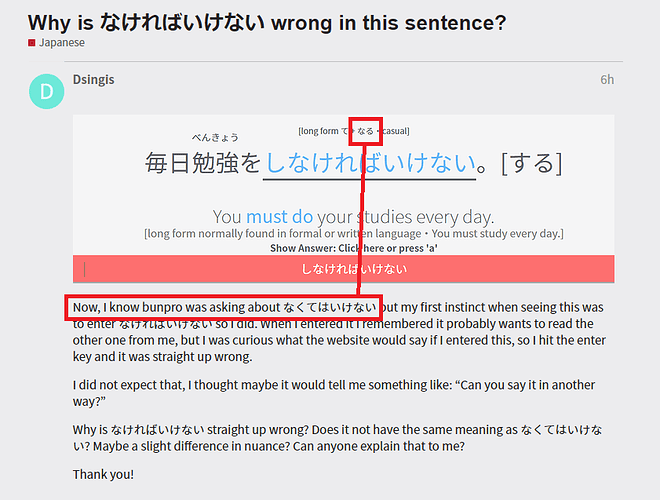 For what it’s worth, I mess this up every stupid time. If I come across sharp about it, it’s because I’m remembering all the times I stumble over this.

Edited to add: Even just thinking about it more, I’m so annoyed at Japanese. “Do you want ‘nakute ha’? ‘Nakya’? ‘Nakucha’? And is it ‘ikemasen’? ‘Ikenai’? ‘Narimasen’? ‘Naranai’?” What’s with you, Japanese?

It may just be that the only reason it’s straight up wrong and not prompting you is because it is indicating it wants long form て + なる. I wonder if there are other examples in which something like this would be flat out wrong without such prompting overhead.

It’s possible to choose the wrong words for a given context, but since we only get one sentence on bunpro it’s difficult to infer the context without the hints. For example, the sentence in the original post has the English note “long form normally found in written or formal language”, which also points at なければならない, but if we only look at the Japanese sentence then the part we’re supposed to fill out is what’s the biggest clue the text is written or formal. In other words, we must use the hints.

I think it’d be difficult to find a context where only one form is acceptable. E.g. let’s say for なければならない bunpro could establish formal writing as a context, so when we see a few formal sentences around the one with the gap, we choose this form. The problem is formal Japanese that’s formal enough to be an obvious case for this form could be difficult to read for a learner who is in the middle of N4. We must avoid misunderstanding it as “all written Japanese” etc. as well.

Or let’s consider the even more stuffy せねばならぬ. It means the same as しなければならない and in an otherwise stuffy context, that would probably still be preferred, so we must make the context look old-fashioned and be trained to react to old-fashioned written Japanese with this form even though it’s not necessarily the best one. For example let’s say a sentence like …_______と考えてゐる could trigger せねばならぬ. The distinction is just as artificial as a hint that clarifies which form to use, just more annoying, and then some learners would not realize it’s artificial and just think this is the normal way to use the phrase.

Another point is that if possible, a single SRS question should only test one thing. SRS doesn’t work very well if the SRS can’t figure out what part the learner doesn’t understand. Randomly getting questions wrong because the context wasn’t understood correctly breaks the SRS to some degree because it can’t tell whether we got the context wrong, or understood the context but got the grammar wrong. Hints as part of the question avoid this. If it asks for “long-form + ば + なる” and we get it wrong, the SRS knows we didn’t remember how to use this specific form.

Another reason for the reliance on hints is also that if you add the なければならない point to your reviews, you expect to be tested on it, and therefore the site must ask for it specifically, and can’t just accept one out of 500 other ways to say it. Otherwise we effectively never get tested on a lot of the grammar we select for reviews.