Another mode of SRS (feedback, and a serious suggestion)

Bunpro is great. But since a long time ago I completely stopped using the SRS feature (kinda ironic, because that’s the point of Bunpro). I’ve been struggling with a couple things in the process of reviews which I’ll list below, and I’m pretty sure some people might feel the same. Bunpro has been great as a reference, but the way reviews are done isn’t my cup of tea. I’ve been thinking a lot lately about some alternative that covers what SRS should have been (in my opinion), I’ve even considered working on my own app, but Bunpro already is perfect if what I’m thinking about gets implemented so I thought about sharing this.

I know that one of the selling points is writing the answer in reviews, which usually cement the information more. However, I think this works best for isolated blocks of information (Kanji for example). In the case of grammar studies, SRS is awesome, but my goal is to be exposed to these points in many sentences. In its current state, Bunpro is almost exclusively targeted towards production of language. What I’m thinking about is providing 2 modes of SRS:

I usually just try to get on Bunpro every couple days, and pass by some of the latest points I’ve studied. This isn’t committing enough and I end up not using it for weeks because there are no explicit reviews to do. Anki isn’t good enough for this, I want a smart app, not a collection of cards.

At the end, I genuinely feel this is the right way for me to study, and probably for many others. If Bunpro doesn’t provide this on the long run, I might have to do my own thing, but I would love for it to be implemented here, because, you know, I already bought lifetime

Feel free to counter any point I mentioned. I’m open to discussing this more.

I literally proposed the same thing the other day but with some exceptions as our target/goals look to differ. I just wanted the freedom to review old sentences that I cleared (streaked) in a classic SRS format (not necessarily a separate SRS path), sort of a reverse-platform as a comprehension double check that compliments the productive input.

) so BP production has been a life-saver. My 2 cents: I think communication practice is really what makes grammar FUN and keeps it exciting. Just the other day, I told my italki teacher “I just learned these grammar points today, can we use them? I never saw them before”. So in the midst of conversation, she would sneakily add them in various ways and then get me to use it as well. It never felt like a chore or drill, just shooting the breeze but the added freedom of expression is a wonderful feeling. The BP reviews were easier with extra ideas on usage (and of course ‘comprehensive’ reading becomes much easier as well). Given you are not adding any BP lessons, I just wanted share how I’ve liked it but I will say that I feel that I’m still exposed to various sentences of the same grammar point (as long as I get it right to see the new one

) but I know it’s not the same. Either way, good luck in your studies…I hope they can add a another comprehensive-SRS path for both our purposes.

Oh I see, I did a quick search but I didn’t find anything before posting this.

I definitely agree that communication is the best way to absorb grammar points naturally. Unfortunately not everyone has access to it, or even if they do, you have a limited time with it, as opposed to personal time in which you can give as long as you want while reading a book or something similar. Which is why I proposed this. It serves to benefit people who are intensively learning a language through passive paths (reading in particular).

Thank you for sharing, I would love to have a tutor for practice but I won’t be able for a long time, so that’s why I primarily depend on reading to acquire everything

. I believe if I get my passive familiarity with grammar points to a good level, production won’t be much of a problem.

One thing I, and I think many other learners, find hard to find are good basic listening resources. Bunpro has a lot of basic sentence audio clips. What if you added a mode in the settings where instead of being prompted by the sentence you get the sentence audio instead? Just like SuperNative’s “Listen + Recall”. Where it would work like so, Click review You’re brought to the review page, which is blank Sentence audio is played Prompt pops up to replay audio (i.e. normal/slow buttons) When …

Have you tried the app Easy Japanese. Its mostly news but you can highlight sentences and get instant translations that are pretty good. It might be kinda like what you’re looking for.

So you basically just want a reading review mode.

Have you tried the app Easy Japanese. Its mostly news but you can highlight sentences and get instant translations that are pretty good. It might be kinda like what you’re looking for.

Not really, I’m not very interested in reading -> then looking up grammar (I already do that reading novels). My point is an explicit study of grammar points as categorized here on BP. So every day you can just learn another grammar point and add it to SRS so that you start seeing different sentences that targets that point every day in reviews.

Not really, I’m not very interested in reading -> then looking up grammar (I already do that reading novels).

Yeah, it just has a list of grammar points at the end but, since it has that highlight translate feature I though it might be a nice way to practice.

The Mazii Dictionary app can look up sentences by grammar. So you could follow Bunpro’s grammar points and look up additional sentences with that, and then make your own SRS flashcards. 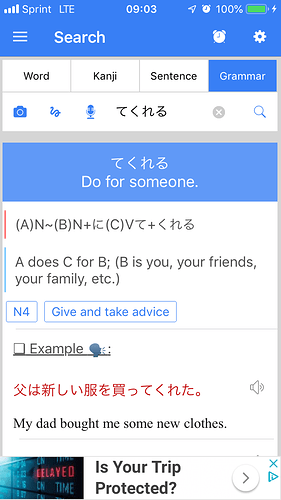 Just trying to give some suggestions to try until your desired features are implemented. They’re still building some of the core content (N1, N2, sentences, audio, etc) at the moment so I don’t think they really work on implementing anything like this terribly soon. After all people have been suggesting the listening reviews idea for longer and I haven’t heard anything about it being implemented.

The Mazii Dictionary app can look up sentences by grammar.

Oh I have this one, it’s really great and I use that function a lot.

So you could follow Bunpro’s grammar points and look up additional sentences with that, and then make your own SRS flashcards.

True, true, but this is exactly what I want to avoid if I can. Nothing beats having everything laid out nicely in a single smart app.

I do realize this is a long shot, but oh well. Thanks a lot for your suggestions, and I’ll check out the other app you mentioned.

Nothing beats having everything laid out nicely in a single smart app.

Yeah definitely. I’ve spent hours and hours making flashcards so I feel you there.

I do realize this is a long shot, but oh well.

I wouldn’t be surprised if they implemented it eventually. I’ve seen a lot of good feature suggestions get liked by the admins and probably get backlogged. So there’s still hope.

While I do feel like a JP->EN SRS is faster and easier for me, production forces me to spend more time getting each item exactly right so I can get better retention. Heisig had a point with forced EN->JP production, as if you can do the EN->JP translation successfully, you can certainly do the JP->EN no problem.

Heisig had a point with forced EN->JP production, as if you can do the EN->JP translation successfully, you can certainly do the JP->EN no problem.

While I agree productive input is more difficult, it doesn’t guarantee a smooth JP->EN transition. Various users, including myself have encountered this same problem. It was evident once I started drilling into JLPT material and it was like a muscle I hadn’t exercised enough.

Everything I do in Japanese is about reading. So for me, something like WaniKani which focuses on JP --> EN is ideal. Bunpro does the opposite; you need to read the English translation and provide the Japanese version. This is much harder to me, and while some may benefit from this added challenge of having to “produce” the Japanese, to me it is just frustrating. It’s getting to the point where I’m seeing so many things that sound the same in English that I can’t come up with the answers in Japa…

found this thread when looking for the highest leveled user, which happens to be OP-san

This is an interesting idea. I wonder how hard it would be to put the sentences into Anki and use that for the reverse card.