English
because of
as a result of

How do i know when to use no tame ni or to use ni yoru or ni yotte?

This gonna be a long ride. So put your seatbelt on.

ため(に) can express profit, purpose, reason, cause and basis for judgment or conjecture.

自然環境のために生分解性物質を使うべきです。
We should use bio-degradable materials for sake of nature.

建物を建てるために中でもクレーンが必要である
You need a crane among others in order to build a house.

コンサートが地震のために中止となった。
The concert has been canceled due to the earthquake.

彼女は弱そうに見えたために殺されただろう。
She has been killed probably because she looked weak.

によって can express agent in a passive sentence, means of doing something, dependency and reason and cause.

この漫画はくぼたいとによって描かれた。
This manga has been drawn by Tite Kubo.

多くの人はよみちゃんなどのアプリによってライトノベルやニュースを読めるようになった。
A lot of people have finally become able to read manga, new etc by means of applications like yomichan.

A会社は問題について対処できるかどうかによってリリース日が 延期するかもしれない。
Depending on whether or not A company will be able to deal with this problem, the release date might be postponed.

指定されたキーの組み合わせの操作によって、アプリケーションを終了する。
The app closes due to a specified key combination.

I have bolded common parts, on which we will focus.

Usage: (assuming the structure of the sentence: A, B)

I hope it helps.

Thanks. I will study this but I’m thinking it will take awhile to fully sink in. Great write up.

Can you do a comparison with で as well?
For example
コンサートが地震のために中止となった。
地震でコンサートが中止となった。
Is there any difference between both of them in nuance? Cases where you should be using one instead of the other? Besides the fact that で is only used with nouns (and maybe Na Adjectives?).

Hey and sorry for the very slow answer

Those two are both possible expressions and mean the same thing.
The main difference is that て form (in this case で comes from て form) might express reason or cause like から、ため、ので but it is much weaker than those. で can also express location, means, time, etc.

When で expresses reason/cause the nouns is something that is beyond human control, the most common sentences with で are about illness and weather.

To be honest, in those cases で seems to be used more often.

That is basically it. I hope it helps

I am really struggling with this. Under the “usage” section of your writeup, would it be possible to include example sentences for each bullet point to demonstrate the usage distinctions? I totally get it if that’s a bit much, but it would be greatly appreciated! Either way, this is already tremendous stuff, so thank you.

Hey, after researching this topic a bit more, I found a great explanation from the Dictionary of (Basic and Intermediate) Japanese. Here’s my understanding of it.

TL;DR: Ignore によって’s other functions (passive sentence agent, and dependency), leaving only cause and means. Then, we have that a) Both clauses must have the same temporal referents, b) the preceding element can only be in the past when expressing cause, but not means, and c) Unlike ため・から・ので、ことによる cannot be used for reasons, only causes and means. However, the line between reason and cause is blurred, so I’m not sure I’m fully on-board with this.

So in the below example, it would be wrong to use ことで or ことによって, but would be fine to use から、ので、ため（に）. Pay attention to the first half of this example because I’ll be using it to make other points later:

私は学生の時あまり勉強しなかった｛XこどでX・ので・ために・から｝今とても苦労している。
The problem here is you S1 and S2 are clearly referring to different time frames (in school vs. now). However, this sentence is correct (same sentence, just that it has a different ending):

私は学生の時あまり勉強しなかった｛こどで・ので・ために・から｝よく叱られた。
This is okay because the temporal referents are the same. I’m going to be referring to this example throughout the rest of this post.

Note: The Dictionary of ~ Grammar keeps saying that ことで and （こと）による cannot be used to express reason (unlike ため（に）・ので・から), but I think the line between cause and reason is often blurred. For example, I would consider it okay to classify the correct sentence in bullet point 2 as a reason for being scolded often.

An example they give for reason (and that thus cannot be used with ことによる) is:
彼はパーティーに来なかったのは忙しい｛ためだ・からだ・XことによるX｝。
(The reason he didn’t come to the party was because he was busy.)

But again, I think the line can be blurred, because you could say the following in English: “He was busy, so that’s why he didn’t come.” You may think: “oh, you just used so that’s why = so that’s the reason why,” but we can use the same language with the example sentence in point 2: “He rarely studied, so that’s why he was often scolded,” and supposedly that sentence represents a cause.

Maybe it’s the case that we shouldn’t use so that’s why to translate the above party example. Then everything would be consistent, as that English phrase would only appropriately translate causes rather than reasons. But I don’t think this is the case, because I believe I can rewrite the sentence in such a way that it conveys the exact same information, and would be appropriately translated with so that’s why. And presumably it would still indicate reason and thus ことによって would not work.

Here would be my attempt to rewrite the sentence so that we could translate it using so that’s why (but this is unchecked, I am making this sentence right now, so keep that in mind!):
彼は忙しい｛から・ので・ため（に）｝パーティーに来なかった。
(He’s busy, so that’s why he didn’t come to the party.)

So unless the above sentence can magically now be used with ことによって・ことで (despite conveying the same information), I don’t see a consistent way to differentiate between cause and reason. If anyone can help me with that, that would be great! 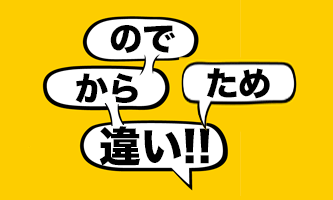 Thinking about my old post a little more, I now think I understand what they meant by the word reason. I think they meant “justification.”

So you can’t use ことで・ことによって and the like as justification for something.

So simplifying my old post a bit, we have that to use ことによって・ことで, it differs from ため・から・ので in that:

Sadly the link is broken now

Pro-tip : You can always bung a link in the wayback machine to see if there are any copies Yeah. I already added automatic replacements for broken Jgram and Tanos on my Bunpro Toolbox userscript, I think I’ll add 99bako to that list as well in case there are any other links.