English translation:
I heard that
rumor has it that
it is said that
it means that

Explanation:
[Used to: report of what has been heard (more formal than そうだ), often used with によると/によれば・to explain something・to analyze something]

@s1212z @Anthropos888 ということhas many uses, but like @s1212z says, they are in fact really similar, and if you know the context you don’t really have to think much about exact translation, but there are some hints. explaining something(like phrase) Aというのは・とは・って、Bということだ。 A means B. ‎満身創痍というのは傷だらけということだ。 analysis of some fact etc Aということは・とは・って、Bということだ。 A means B. (I have been bitten by vampire, that means I will turn into one) 吸血鬼に噛まれたということはすぐに吸血鬼になるということだ。 hearsay (I heard that etc, more…

First of all, short introduction: So, there are cases where という is necessary, and when it is optional. Necessary: when clause before it is a quotation 車だよということ - since there is final particle we know it is a quotation (よ in this case, but だろう、でしょう、わ、ぞ、な etc are included) 車を貸して(ください this is not said)ということsomethingsomething - unfinished sentence also points a quotation Optional (depends on speaker’s/writer’s preference): when clause has new information and speaker wants to emphasize it…

Should be possible as well (since the “formal” hint is missing): 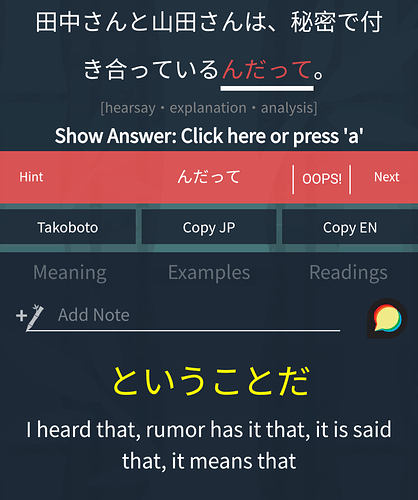 I kinda also feel that らしい would work here too? Especially given the “rumor has it” meaning?

I would guess that if you hadn’t put だ then it wouldn’t have been an incorrect answer. Putting だ after らしい is incorrect, as it is with all い adjectives.

@matt_in_mito, thanks for your reply!

Of course, you are right on らしい being an い-adjective. Also, I don’t think I even went through the alternative answers. I will do when the card pops up again.

A follow-up and conclusion : らしい is indeed a “semi-accepted” answer.

Apologies for posting too quickly in the first place

How about adding とのことだ which is a bit more formal but basically the same?

@Razael
Hey and welcome on the community forums

I have added とのこと to answers, and a note about it.

Thank you very much for the feedback!

Quite a few! Taking the above example,

田中さんと山さんは、秘密で付き合っているということだ。
It is said that Tanaka and Yamada are secretly dating (bit gossipy, but whatever

If you were to replace ということだ with といわれている, the nuance would change to be more concrete. This means there are people literally saying that Tanaka and Yamada are at it, rather than an insinuation that there is a rumour that they are at it. Similarly in English too, the expression “they say” is a bit misleading because there is no “they” and they aren’t saying anything, it is used to express hearsay or a rumour.

Hi!
I found this in Shin kanzen master N3 dokkai, it says ~とのことだ is an alternate version of ~ということだ, maybe it could be added too?
Hope it helps! 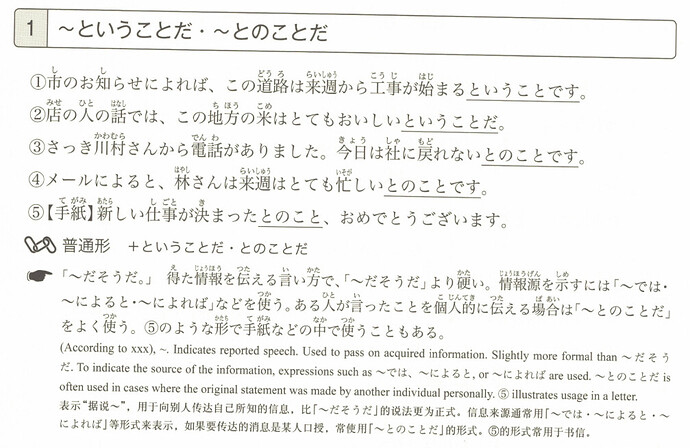