to start, to begin to 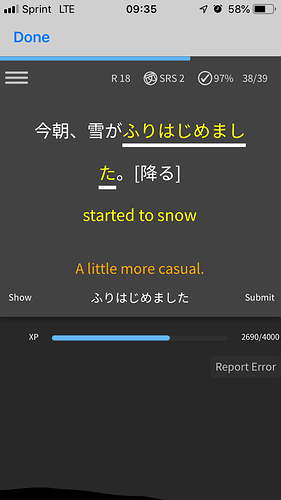 Is there a reason so many of these sentences require me to enter the informal form?

@Johnathan-Weir We do this mostly to match the audio associated with the original sentence.

Alright, just making sure I wasn’t missing some sort of subtlety.

Hey! If you were to say 日本語を勉強し始めた。すぐ日本語の難しさが分かった。The English equivalent would be “I started studying Japanese. I soon understood the difficulty of Japanese.” However, if you use the conjunctive 始めて here, the sentence flows much more naturally in both English and Japanese. 日本語を勉強し始めてすぐ、日本語の難しさが分かった。- " Soon after I started studying Japanese, I realized the difficulty of the language." You will also often find 始めて paired with すぐ and から, so if you see すぐ or から immediately following the blank, it is a good indicator to use the て-form of 始める. Cheers!

@Paulkun Hey! When the て-form appears in the middle of a sentence, it is usually acting as a conjunction between two parts of the sentence. So, in the above example, if we were to remove すぐ altogether, we would still have a functional sentence: 日本語を勉強し始めて、(すぐ)日本語の難しさが分かった。 Notice the comma after 始めて. Using the て-form here is like saying “and” in English, so the English translation might be something like, “I started studying Japanese and I realized the difficulty of the language.” When the て-form is used in this way, whatever precedes it will happen or has happened before anything that follows it.

The た(past)-form can only be used in the middle of a sentence if it is followed by a particle. た cannot be paired with すぐ like て and if we pair た with から, it changes the meaning of から from “since”/“from” to “because.” Therefore, if we were to say: 日本語を勉強し始めたから日本語の難しさが分かった。the sentence would mean “Because I started studying Japanese, I realized its difficulty.”

I hope this helps clear things up a bit. Let me know if you have any further questions. Cheers!

Maybe I’m mistaken, but I think the last two examples in the grammar section for はじめる accidentally use はじまる instead?

It’s even more jarring because of the caution box immediately underneath those examples: “Caution - It can be easy to accidentally use 始まる, the intransitive form of this verb. However, with this expression, the transitive form will always be used”

It’s actually the last three sentences that just don’t belong in this grammar point, which is specifically not about standalone verbs.