Explanation:
[Used to point location, state of affairs, period of time and aspect of something in formal language.]

Structure seems to be wrong (only において is accepted as correct answer. I tried における before which also was not accepted) 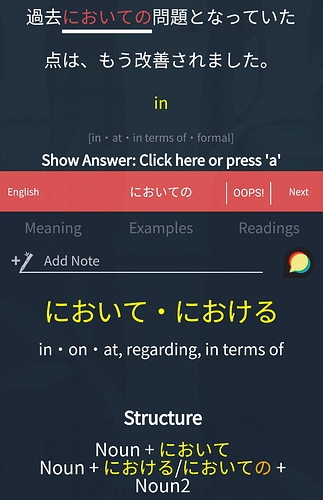 Please explain when to use which when followed by a noun.

It is true that においての and における are used to modify nouns, but using those in the case of sentence above will sound unnatural.
(過去における問題となっていた点は、もう完全に解決 されました。)

Because 問題 is used in conjunction with となった (more formal になった) and modifies noun 点, therefore 問題 is not really a noun, but part of 形容詞句 (けいようしく) - adjectival phrase. Basically, when a verb modifies a noun it behaves like adjective.
(Fun fact, における is also 形容詞句

).
You cannot modify adjectives or verbs with adjectives, you need adverbs to do so.

If you want to use における, you need a noun or noun phrase.
So:
過去における問題点は、もう完全に解決 されました。
Which is perfectly natural and I would say even more formal.

Whenever I put において when it wants における it tells me to use the un-conjugated form. Is における really the base form? Why isn’t the て form におけて or におけって then?

において is not a conjugation of における.
But both expressions come from おく.

To solve the riddle why におく or においた are not used to modify noun instead, we have to move back in time. To classical Japanese.

In classical Japanese, unlike in modern Japanese one verb form couldn’t be used to modify nouns (attributive form) and at the same time be used at the end of clauses.

The realis form is used for something that has been realized/ happened.
It is opposite of irrealis form (which you know pretty well, because it is ないstem without ない - which is used in negation).
Realis form survived as part of the ば form in modern Japanese.

り is basically ancestor of た, it expressed past etc. It is attached to realis (among others ) form of the verb.
(Like ない attaches to the irrealis form of a verb)

So basically, if you were to use modern equivalent of における, it would be においた (since り expressed past).

I have changed the notification to “noun modifying form”

Sorry for the confusion!

I hope that explanation makes up for it

Thank you so much for the breakdown!

I’m not at all knowledgeable about classical Japanese so all you wrote was new to me. But now I can see why this is an exception.

This is not about the grammar point but rather そろっています…I’m told this is this still correct but just more informal. However, since そろえる is an ichidan verb, I would expect something like そろえています. This seems simple, am I missing some casual form here?

Thanks, I never even considered intransitive given the translation which appears to be a non-passive scenario. Would you still agree? This still looks like a transitive scenario to me:

In daily life, I have gathered everything necessary.

Unless it’s something like: 'In daily life, the necessities are satisfied’…then it would be a translation issues rather than being ungrammatical.

I don’t normally look at the English sentences much. I understood the Japanese as something along the lines of “All the necessities of daily life are there”. The English sentence looks like it wants to differentiate a bit more between において and においての, so maybe “Regarding everyday life, all the necessities are there”? But in natural English this ends up being “I have everything I need” or “We have everything you need” etc.

Don’t trust me with Japanese or even with English, though…

I don’t normally look at the English sentences much.

Wish I could say the same. These formal expressions or written only grammar points I end up cross-checking much more. I test natives with BunPro and they fail all the time so I guess I don’t feel terribly guilty

@mrnoone, any comments on the english translation from above?

And since において is a highly formal expression, it doesn’t even make sense to me to have it used in personal daily activities provided that is the intended translation. The grammar dictionary says it’s very rare, while the linked reading to use で instead.

Almost as if the example sentence is a pun 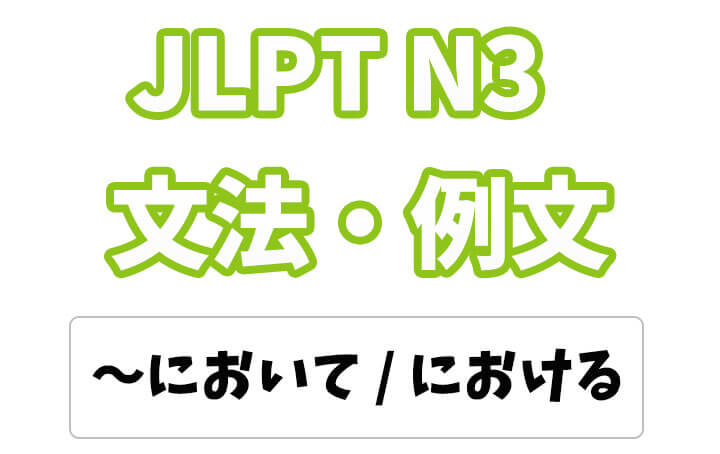 I have a question about this example:

東京における環境についての会議を行います。
A meeting concerning the environment will take place in Tokyo.

This translation implies this structure: 東京における【環境についての会議】を行います。

But it seems to me that segmenting it as 【東京における環境】についての会議を行います would also be reasonable, which would give “A meeting concerning the environment in Tokyo will take place.”

How do I know which way is meant?

When I read this sentence, I also read it as 【東京における環境】についての会議を行います. Since における works like －での and において works like ーで, “A meeting concerning the environment in Tokyo will take place,” might be a better translation for this sentence. I’m just speaking from a native perspective so I could be wrong so I will look deeper into this.

I interpreted this as
東京における（環境についての）会議
So if we took away the fluff, it would just be 東京における会議 and it’s just giving additional information about 会議 by modifying it with 環境についての, so I read it as:
“A meeting (about the environment) that takes place in Tokyo.”

The other possibility is that 東京における is modifying 環境 (instead of modifying 会議), so then we get 東京における環境 first, and then it’s about that which the meeting is going to be about.

So you could either interpret it as either

Unless I am mistaken, it could go either way, but the intended meaning (based on Bunpro’s translation) is the former rather than the latter.

@NickavGnaro Yes you are correct it really depends on the context of when this was said and in what situation.
@Haruka We have just added a comma after における so that the current translation would fit better.

We have just added a comma after における so that the current translation would fit better.

So that’s why these blue hints teach me kinda completely opposite things.

If I type における here: 現代における、のないはえられない。
Hint says: It is more natural to use a conjunction here/not modify the noun. Notice the comma.

IIRC hint says something like: you’re modifying a noun here, use における.

So in the first example I have to notice the comma, but in the second one I haven’t

I think it would be nice to rephrase these hints.

Could you provide more feedback around what’s confusing you with the hints?