Non-sequence
and
but (contrast)
parallel action/state

[Similar to adjectives, you can use Verb[て] without implying a sequence of time]
[Usually, the verb expresses a state/attribute, is in the potential form, or describes actions/events that have different topics/subjects]

[When parts of the sentence (clauses) that are connected with the て-form have different topics, it often implies that they are contrasted with one another. In those cases, when the contrast is strong, て can be also translated as “but” and can be rephrased to が/けど, etc. instead]

[The て-form is heavily dependent on context. The first sentence by itself can express the sequence “A then B,” but the second sentence can cancel the implied order of the first sentence and be understood as “B then A”]

No issue with the grammar point, but the hint for this example threw me off completely. 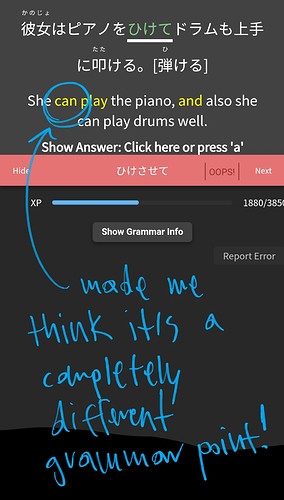 Could you please change “can play” to just “plays”?

@Lamster Hey! The Japanese sentence uses 弾ける, the potential form of 弾く, “to play.” The “can” in the sentence is referring to the subject’s ability to play the piano and is indicated by the verb hint at the end of the sentence ("[弾ける]").

It looks like you were trying to conjugate with the causative form (“made to play”), which would be 弾かせて and would not use the potential form and would not fit well within the context of the sentence.

Let me know if I am misunderstanding your comment. Cheers!

Thanks, you’re right, I got is now! I was somehow under the impression that there are only plain forms of verbs in the hint parentheses, so I assumed that 引ける is the plain form of the verb.