Hi, I have a question about this if I may:

The grammar explanation says: “you will need to change the last kana of the verb into the あ sound kana”. So that’s what I did. I took ねむるand changed it to ねむら, and then added ませんでした. But it got marked wrong. Any ideas why?

Thank you for any help anyone can offer!

Ah, just seen the ‘formal’ drop-down examples! So, you change to the あ sound for casual, and the い sound for formal! That’s it, isn’t it?

It’s not so much about wether its casual or formal, but more about what form of the verb you’re using. Since ねむる is a Godan verb, its stem form is ねむり.

Thank you! My problem is that when I think about grammar my brain goes all foggy. I looked up the different forms of 眠る (how I’d like to 眠る right now!) and this is what I found: 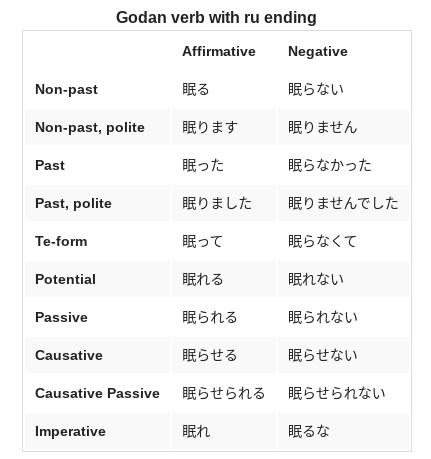 Sometimes it’s ら (眠らない, 眠らなかった), and sometimes it’s り (眠りません, 眠りませんでした) and it looks to me like the difference is that it’s ら for casual and り for polite. Is that not the case? I’m sorry, I’m deeply confused.

Hey no worries! Let’s take it from the top.

Remember that verbs in general, fall in 3 categories: う-verbs or godan (5 step, or 五段), る-verbs or ichidan (single step, or 一段), and irregular verbs (くる、する）.

食べる is an ichidan verb, so to conjugate it you just remove る。

切る is a godan verb, so to get its stem you just “change” the final う vowel sound at the end into one of the other 4 japanese vowels, making ru change into any of the following:

Now, the base I want you to focus on for this example is the い sound base, because its what’s commonly refered as the verb stem. A lot of conjugations are grounded from here. Whenever you hear “just use the verb stem”, they’re refering to this.

An ichidan verb stem you get by just removing the る. A godan, you get by changing the う into an い.

So, wrapping all of this up…

Sometimes it’s ら (眠らない, 眠らなかった), and sometimes it’s り (眠りません, 眠りませんでした) and it looks to me like the difference is that it’s ら for casual and り for polite. Is that not the case? I’m sorry, I’m deeply confused.

On 眠る, which is a godan verb, you’re using its stem (い sound) to just combine with ～ます to conjugate.

ら is just its あ sound base. This one is used for negation in casual tone. So, 眠る shifts to 眠ら, and you just slap the auxiliary ない, resulting in 眠らない! An ichidan you would just remove the る and slap on the ない. 食べる → 食べ → 食べない.

A great book to explore the fundamentals of Japanese conjugation is The Handbook of Japanese Verbs. A lot of stuff clicked for me when I read that book.

This was way longer an answer than anticipated, but I hope it helps!

This was way longer an answer than anticipated, but I hope it helps!

Wow, thank you so much for such an amazing reply! Really clear and really comprehensive, I am really grateful. Thank you.

Now to copy it down and study it like crazy! Thank you so much @Daru

A useful thing I’ve learned over the years is whenever I see a super helpful comment in the forums (or, really anywhere) is to copy and paste the explanations into the Notes section on the grammar point. That way if there’s ever any info I need on a particular point, it’s all in one place. I used to have all my stuff in note pads/documents/etc. but when I started using Bunpro I realized it made a lot more sense just to keep everything centralized.

Pluuuuuuuuus, to plug the app currently in development LOL, it’s nice to have the notes always quickly available on-the-go

Nice idea! Thank you so much! I’ll do that from now on!

No prob! Glad to be of help.

Also, have you unlocked any of the Self-Study badges? Judging from your profile picture, you might like them.