I don’t understand how the vocabulary section is meant to work. I have found the vocabulary deck and started going through that but for N5 it is a 1,000 words in alphabetical order- which is not very appealing.
How do people use it? (By the way I have never used an anki deck which maybe is my issue.)

Just use it to learn unknown words. I set known words to level 12.

I agree that it being set to Alphabetical order is a really annoying.

The reason it is set in alphabetical order is more for words that contain kanji than anything else.

For example if the words 主張, 主催 and 主席 are all learned relative close to each other, it will give the user a stronger feel for how 主 is used in various words. We may alter this in the future to follow a different approach, but there are no immediate plans to do so. Is there any particular reason the alphabetical approach is inconvenient?

As for how to use the deck, it is recommended to read the example sentences provided for each word (they are arranged from easiest to hardest), to get a good understanding of when that word is used, then move on to the next word. As you feel your vocabulary is increasing and you are learning more grammar, challenge yourself with the more difficult sentences that use that word when it comes up for review.

The vocabulary decks aren’t just to learn new words, but also to give you an opportunity to see that word in natural sentences, as well as to slowly but surely challenge your reading comprehension.

Thanks for the hint about the example sentences. To be honest I hadn’t noticed they existed. That will make it more meaningful.
The problem with the order is there are some strange words at the beginning eg SRS, Lサズ. It will take me a while to reach kanji I think.
Can you tell me what the brown triangle and hiragana that appears sometimes at the bottom of the card is for.
The orher problem is it is a bit tedious setting the ones you know to 12. I cant do it from the first screen.

That triangle below the word shows there are other ways to write that vocab.

Is there any particular reason the alphabetical approach is inconvenient?

I’m not using the vocabulary feature right now, but speaking from experience of using other decks that were alphabetically ordered in the past it’s because it made it too easy. This is true if they were organized via their kana or their meaning in English.

If I’m learning like 20 words a day, basically all of them are going to start with the same kana. In the past, this basically caused me to not focus on trying to read the kanji because I already knew how the word began simply because every other word in the set began that way. As an example, if in a day I’m learning 会議 and 海岸 and a lot of other words starting with かfor N4, I’m not really going to be looking at the kanji as much as I should be because my brain is already primed to go “か-something”.

Back when I used memrise I avoided decks specifically for this purpose.

Also, just as a personal note, it feels incredibly boring to study so many similar sounding words at the same time.

Thanks thats helpful. And I agree alphabetical order is boring.

There are example sentences?

My main concern with the vocabulary is that so much of it seems like obvious katakana versions of English words - I haven’t come across most of these types of words in the JLPT tests because honestly not that many words in JLPT are in katakana, especially just English words transcribed into katakana.

I don’t want to sound too negative though because I really like the ability to study vocabulary and am really looking forwards to this being rolled out to N3 and beyond in the future!

The example sentences are hard to access. There is a (subtle) tab when you are learning the words. But I cant find a way of accessing them when you are doing the reviews.

I will give more feedback later after thinking it over.

I was just looking into starting to use Bunpro for vocab. I still have to start but here is my plan:

As I am following the Genki grammar path, I will learn vocabulary by there genki order too! The content team already made a deck with just genki vocab and grammar: https://bunpro.jp/decks/yqtizh/Genki-I-3rd-Edition
For every chapter of genki, I will just look up the vocab list and add those words to my bunpro review queue.

I am currently not using Genki much. I do follow its order though, so I can look into the Genki book if I ever need some more information. Once I learned more of the vocab and grammar using Bunpro’s SRS system, and some more Kanji through Wanikani, then I’ll go through the Genki books to also practice a bit of writing and listening.

Is there any particular reason the alphabetical approach is inconvenient?

For the most part I think alphabetical is fairly fine. But it does lead to having the same synonym several times in a row which for me makes it hard to learn them individually.
Example provided

Earlier today i was trying out the tango n5 anki deck.
and it really gave inspiration of what bunpro vocab could be like.

I know there are allready example sentences

But what if an example sentence was shown during review

And it feels a great way to learn vocab

Would also be even more interesting if for pitch accent it would color the word for the correct Pitch accent
Just like that anki deck does. with mouseover for even more pitch accent information

there is just so much potential for bunpro, like for higher n levels the example senctences during review could be more in dialog form (learning us how japanese is naturally spoken) while still teaching 1 new word at a time

there is so much growth potential that im really curious to see what you guys have in store for us in the future.

I’ve started taking the words I don’t know from the reviews for grammar points, and searching them through the decks for N5 and N4, then adding them to the reviews as well. That way I will see a word both in context, and then by itself; I find it helps me memorize them more easily.

Anyone else have this issue? 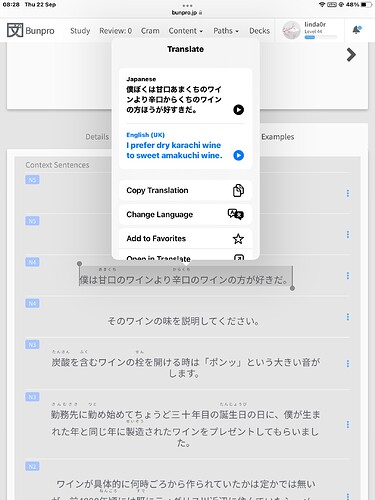 I’ve started taking the words I don’t know from the reviews for grammar points, and searching them through the decks for N5 and N4, then adding them to the reviews as well. That way I will see a word both in context, and then by itself; I find it helps me memorize them more easily.

@Asher (sorry, don’t know how else to address a quote from another poster to the BunPro staff in general, so you got picked by default!

),
Wouldn’t it be great if vocab words that happen to exist within example and review sentences (whether they be vocab examples or grammar review sentences) could be easily added to our Vocab review stack/set?

For comparison, the way you can turn furigana on and off by clicking a kanji (one that has furigana support) is really super handy. Imagine if you had to search up each kanji on a separate search page, open up a separate page for that kanji, and then click “Show/Hide Furigana for this Kanji” each time? A nightmare, right?! But just clicking on the kanji itself is such a more streamlined interface!

So, currently, when there is a word within BunPro (let’s stick to example/review sentences for now; talk about interface and write-ups later) which happens to also be a vocab word, you have to go to the Vocab Search page, find the vocab (if it’s even there; another bit of information that could be more easily accessible to the user when looking at example sentences!), then open up a new separate page for that specific vocab, and then finally go to the bottom of that page and click “Add to Reviews”. What a nightmare, right?!

Wouldn’t it be so so much easier if we could click vocab items within example sentences and get a quick little pop-up giving us the option to “Add to Reviews”? And potentially also to “Remove from Reviews”? (Having such a quick little pop-up would allow a single click to have more than one possible action; also prevent accidentally adding vocab words just with a random single click.)

[I know this isn’t the Feature Request thread, but could you possibly take note of this as a feature request? Thanks!

I believe that if this kind of feature were implemented (and I don’t think it should be terribly difficult to implement, but who knows?) then usage of the Vocabulary features would be much easier for new users to quickly pick up and adopt.

Here’s a possible way to implement it which would leave the kanji-furigana-single-click feature largely untouched by it:

This is just brainstorm material / suggestions. Take what’s helpful and ignore the rest.

How do people use it?

Personally, I also dislike the alphabetical ordering of the BunPro Nx vocab decks. Even just ordering it according to frequency of popular usage (such data is available out there) would be better. But ideally, being able to use a sortable list of items in a deck would be much better. Then you could go alphabetical if you want, or by usage frequency, or by ‘most/least recently added’ or by some other ordering, whatever you want.

The way I am currently using the Vocab feature is mainly to use other decks that have useful vocab and just follow their ordering. For instance, I have already gone through the Genki I decks (both 2nd and 3rd editions), and the Marugoto Starter (A1) and Marugoto Elementary 1 (A2) decks.

In fact, Marugoto Starter (A1) was a very good deck to start with, if you’re looking to start from ‘the beginning’ (whatever that might be). It only has 45 grammar points, so if you’re not yet very far with grammar, then it won’t overwhelm you. It has 327 vocabs, so a good starting size. And they’re all very basic. Even the vocabs which are katakana (usually English/foreign loan words) I found helpful to bone-up on my katakana reading practice.

I’m currently working my way through the last Marugoto Elementary 2 (A2) deck. Almost done it actually.

Now, these decks do not cover all the vocab that’s available, so as I go through them, I also supplement them with the (alphabetical, but whatever) BunPro N5 Vocab deck, which I’m also almost done.

After that, I’ll have to go back to alphabetical, with the BunPro N4 Vocab deck, but at least for the N5 vocab, you can get a ‘graded’ ordering by using the other vocab decks. Hope that helps!

One last thing: There is the Grammar Reading Practice feature, which I haven’t used much yet, but it seems like a nice idea. (Could definitely also benefit from an easy way to add vocab words from within those sentences to one’s vocab review.)

What about having a Vocab Reading Practice? Perhaps each deck, with its own particular ordering (and hopefully in the future, ability to sub-group items in a deck, just like the chapters in the book(s)/path(s)), could have Reading Practice, basically, based on the existing example sentences in the selected vocab items.

It seems to me, as others have said, that the example sentences in the vocab items are rather difficult to find/access. Need to have some additional ways to expose them to user discovery, searching, reading, and using.