こんにちは、みなさん。 I’ve shared the info about this free virtual online Japanese study group on WaniKani first because I’ve only joined Bunpro much later. Thought that maybe this would interest some people here who wants to practice Speaking Japanese too. So from here on, it’s just a copy pasted post from there.

Starting January 2022, every Saturday 9pm JST, Yoshi Sensei, a native Japanese volunteer will guide us through both Genki 1 & Genki 2 textbooks, with light homework / revisions to discuss the next Saturday.

If you’re interested, I highly suggest making a Second Life account pronto, to later take your time exploring other parts of Second Life and getting used to the controls. And then after 2 weeks, you’ll be able to enter Nihongo Tea Room without the confusion of how to sit down on the tatami mat, how to zoom in to the whiteboard or how to make Voice Chat working in there.

However, if a less-structured Japanese speaking exercise might interest you more, every Friday 10.30pm JST, there is a weekly Shiritori event, but in a form of Japanese and English Language Exchange. This activity has the most Japanese native speakers due to them wanting to brush up their English while casually teaching you Japanese. Whereas the Saturday class has only one or two native Japanese teaching the learners.

In Nihongo Tea Room, we’re encouraged to speak mostly in Japanese to each other and the relaxed atmosphere makes it feel like we’re at home, rather than in a classroom. I was astonished that they don’t charge at all, where locally (Malaysia) it would be hard to find such an interesting Japanese learning experience, especially with a native Japanese teacher too.

At the moment, the Genki textbook study group is already full thanks to the positive response in the January 2022 study group enrollment in both Bunpro and WaniKani. We worry it might be hard to have a good learning experience for everyone if it’s too crowded.

The least crowded option for now is the weekly Shiritori Japanese x English Language exchange activity on every Friday 10.30pm JST. It’s happening in Nihongo Tea Room as well, and all you have to do is sign up for an account in Second Life to participate in this Shiritori activity.

So if you don’t mind going through the learning curve of using Second Life as a virtual platform, you’re more than welcome to join us. This could also be an interesting place to learn about other cultures from learners living in different countries while speaking Japanese.

Supposing that your account has past 2 weeks old in Second Life, search for ‘Nihongo Tea Room’ and you will see a Teleporter to the place we have our events every week.

If everything still seems too confusing, feel free to IM me here or in Second Life and I’ll do my best to help explain things in more detail. The latest thread post of January 2022 study group enrollment in WaniKani might give more insight on the FAQs about its requirements.

My account name in Second Life is Haruka Flores and I login there about once a week on average, mostly to attend classes only. Therefore, do forgive me for my slower response over there

Below are snapshots from some of our sessions (photo credit to Nihongo Tea Room founder). Looking forward to welcoming you to our Japanese learning community. 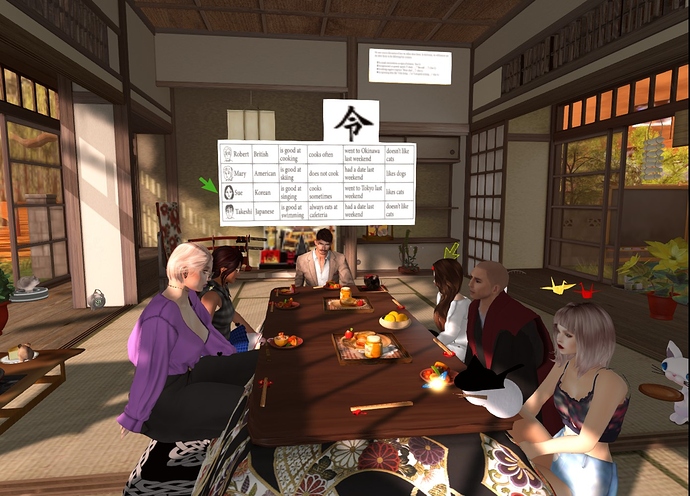 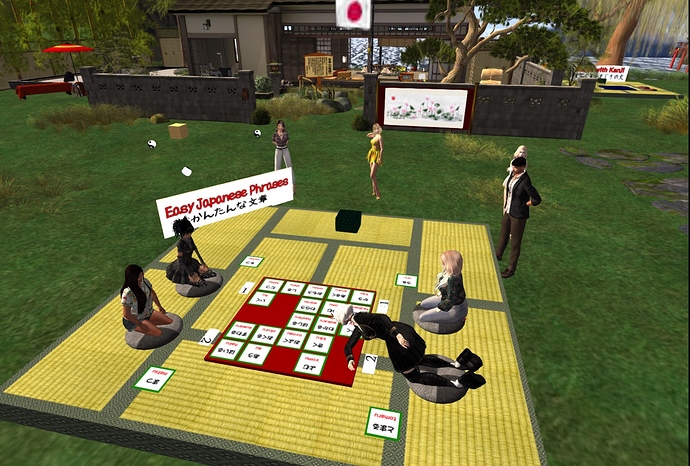 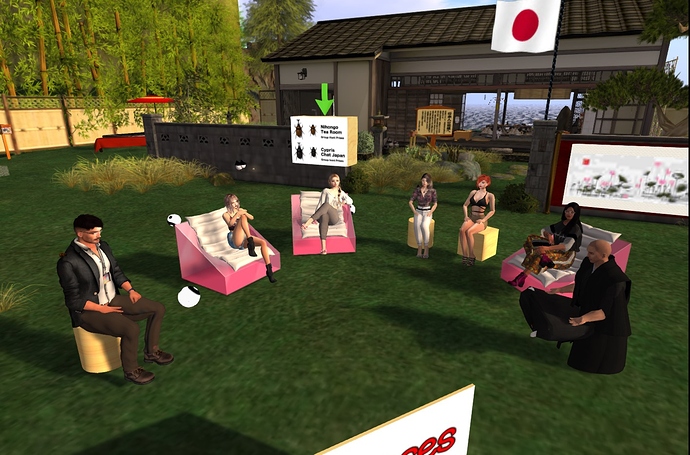 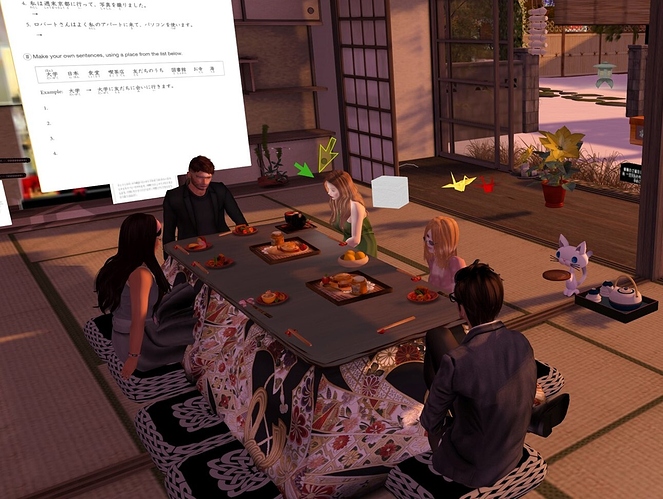 And here I thought this was about a language-oriented isekai.

I don’t blame you for thinking so, especially with such a name for an online virtual world

I think you’re not the only one too, unless if I titled my post badly.

Meanwhile, I think VRChat has a much better name for a virtual platform and straight to the point.

When you talk about speaking in Japanese, do you mean actually speaking with microphones or are you typing to each other?

Yes, I meant actually speaking in Japanese using microphones and at the same time listening through one’s headphones or earpieces. Most of our lessons are through Voice Chat while using our 3D avatars.

Sometimes Yoshi Sensei will ask us to type something in Japanese, depending on the need of the lessons or if a word/sentence needs to be explained, but I think that happens only about 10% of the time. More often, he’s the one doing the typing to explain something in more detail.

Personally, I wrote most of the homework in an exercise book and discuss the answers the following week because I want to practice my Japanese writing too. But one of our Australian classmates who seems much better at spoken Japanese probably just answered straight without writing things down.

So it’s really up to ourselves how deep or how easy one wants to go with the Japanese learning. I’ve never shown Sensei my handwriting because I still think it has a long way to go. Maybe someday when I think I’m good enough, I’ll write him a New Year’s card or a Thank You note as a surprise

Holy carp! I didn’t even know SL was still going. This is interesting indeed.

As someone whose been spending most of their time in Second Life for the past 8 or so years (Mostly to make some side cash these days), I have considered at various times connecting with the japanese community in the game. I had a friend that did such a thing for a while which inspired the idea in me. I have yet to act on it. Interesting to know there’s classes and stuff going on too. I need to get off my butt one of these days.

And yeah, the game’s still going and still getting updates. They recently started moving to cloud servers.

I have considered at various times connecting with the japanese community in the game. I had a friend that did such a thing for a while which inspired the idea in me.

Plan to explore more Japanese sims as well when I get better with the lessons in Nihongo Tea Room. Haven’t gotten that good yet in composing proper sentences when speaking Japanese.

Would love to see you around one of these days, unless the time differences isn’t that great for you. If you’re shy, you can just drop by and observe first before slowly taking part in the conversations / lessons.

However, noticing that your Levels in Bunpro is more advanced, so I don’t think you’ll have much problem catching up compared to a beginner like me

Hi, i just saw this post and i’m interested in some additional info. My first question is, this course starts January 2022 (since this site is saying comments are 10 months old)? Second, a friend and me would like to participate but our accounts are fresh new, where do we send you our nicknames to be approved by an admin? third, will the lessons be only in Jp or the teacher will also explain things in EN? Also finally, at what times can we find you in game if we’re in need of more questions?

Current thread about this is:

Maybe you need to login once but I don’t think you have to do anything else.

Current thread about this

I can’t thank you enough for pointing replies to the right direction! End of the year gets me a little bit frazzled from disorganisation and you’re doing gods work right here. 本当にありがとうございました。

Welcome to Bunpro the community forum and thank you for your interest in this activity too! I’ve shared the info about this when I first started Bunpro months ago because I was learning Japanese via Genki 1 textbook back then. Since then, I’ve been updating the post to keep it relevant for anyone who’d like to join half-way as the class progresses.

If your Second Life account is fresh (less than 2 weeks old), do send an IM to my account there (Haruka Flores). Then I could give your Second Life username to the Nihongo Tea Room owner so she can add you in a safelist. Sorry for this slight hassle in membership screening using the vouch system. I blame the trolls for making everyone’s life a bit harder, lol.

Anyway, the lessons are mostly done in Japanese, with minimal English usage. Yoshi Sensei is able to explain lessons in basic English but in case there are more difficult queries, the Nihongo Tea Room owner will provide more detailed answers in English from a native Japanese perspective.

This is applicable for both Genki 1 & 2 learners as she is there on most weekends to observe the class. Her English is really good that she teaches English once a week in Second Life to other non-native English learners. She also started a Harry Potter book Reading Circle for native Japanese learning English.

But of course for Genki 1 classes, just like the Genki textbook itself, it will still use some English in the beginning until it slowly phases out English usage as one progresses. In case there are beginners joining half-way, Yoshi Sensei wouldn’t mind at all using English again every now and then until they’re able to catch up with the lessons.

I’m also usually in Second Life about once a week on weekends and mostly only to attend the classes too. So in case you’d like to see me before class begins for more questions and help, I think this Saturday 9pm JST would be a good timing since it’s similar to the activity times.

Let me know what you think and thank you again for the questions. Keep it coming if you have more of them and hope to see you in Second Life soon!