Let's go to Japan! A log by yours truly

Hey! I’m here to (finally) start my very own Japanese study log. This little post is created to receive feedback on my methods, gain new ideas and keep myself motivated in this incredibly wonderful Japanese journey!

I started learning Japanese around 2020~ on and off when COVID-19 hit the world and I was basically confined in my house with nothing to do.

As you might have guessed from the title of this post, I’m planning to go to Japan at the end of the year! Tickets booked and most preparations done but still awaiting confirmation from Japan that they would open their borders to tourists like me!

Besides prepping for my trip to Japan, I plan to sit for JLPT N3 too! Who knows, maybe I’ll take it in Japan.

There is a lot I would like to implement in my daily routine - such as flashcards, tracking systems mentioned in Megumin’s post and I’m slowly (but surely)working to achieve them!

Thank you everyone in this community for providing a safe space for making mistakes, sharing joy and encouraging me to continue learning Japanese. Any tips, methods, recommendations and feedback are always welcomed!

ありがとう for reading and I hope your Japanese learning journey would be filled with joy!

It varies for most people! When I’m tired, I tend to do one/two reviews per day!

For taking the JLPT in Japan, just be aware that I think it was 1 or 2 weeks before the exam, by post you need to receive a letter / voucher which has your code and some other info for the exam (eg where you need to go). I saw someone printing it off last minute… but still…

For reading recommendations…
Bookwalker or Booklive or eBookJapan (if you have yahoo.co.jp account) are great for digital magazines / book / light novels / manga… By clicking on the book covers you will be able to read a sample of the item. Some manga are free forever or for a limited time. Eg Spy Family Volume 1 right now

Some ideas:
Manga:
やつばと- Yotsuba and! its really popular starting manga or Nichijo

Novels:
Anything from Tsubasa bunko imprint つばさ文庫 . There are like 7/8 pages (ie 100s of choices) on Bookwalker: つばさ文庫の電子書籍無料試し読みならBOOK☆WALKER (bookwalker.jp)
These green books are great and are around N4 / N3ish level (maybe even earlier) … Some are based on famous movies (Your Name, Summer Wars etc…). There is furigana on everything. Easy-ish to read as they are aimed for kids and with more pictures compared to light novels. Reading 2/3 of them really helped me. Bookmeter (a Japanese website) is great for tracking what you have read.

世界から猫が消えたなら If cats disappeared from the world - Its about a dying person making a deal with a devil wearing hawaiian shirts. It reads a bit like a movie (there is a movie based on this) which makes it easier to understand: 世界から猫が消えたなら - 文芸・小説 川村元気：電子書籍試し読み無料 - BOOK☆WALKER - (bookwalker.jp)

For digital flashcards, there are a lot of options… kitsun, anki, wanikani, kanji senpai, renshuu …
Do you want to make all the cards yourself? Can you program? Try to see how you would like to study… eg do you prefer to be away from the computer? Do you want to do you reviews while commuting and on the go? That should help narrow down your options and ideas.

Besides prepping for my trip to Japan, I plan to sit for JLPT N3 too! Who knows, maybe I’ll take it in Japan.

As @zerohbeat said, I wouldn’t recommend taking the JLPT in Japan because you need to have an understanding of the procedure and you have a long stay enough to receive the letter.

I don’t have the willpower to continue a book after I find it uninteresting anymore. Right now, I’m not reading any books in Japanese since I can’t find one that really piqued my interest. If anyone has an interesting slice-of-life light novel recommendation, please share it with me!

I’d highly recommend to hunt one that picks your interest. Sadly I can’t recommend any light novels of slice of life yet, as I haven’t come across any of my level. I heard good things about this one and it’s on my to-read list eventually: 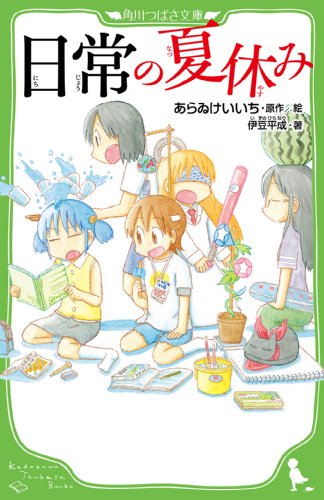 I highly recommend doing tracking as well, it helps you keep up with yourself and make an habit of every task.

Good luck with your quest!

Thanks for your tips @zerohbeat and @Megumin . I’ll take that in consideration when signing up for the JLPT, likely in my country.

よつばと！was a really wholesome manga. I’ll be sure to check out your other recommendations too! If you don’t mind, would you mind telling me your method when reading つばさ文庫 books?

To be honest, I’m not very computer savvy and not a fan of the popular digital flashcards available. However, I’m still exploring new flashcards options! Though I would like something like Bunpro.

Thanks for your recommendations!
May I ask if you track the time spent on reading e.g. light novels along with the materials you track?

Yes I do. Learn Natively does that for you if you don’t want to have/want an extra tool.

I just use a stopwatch on my phone/watch/computer and then record my session for that day.

Also there are some fancy new graphs added by @sweetbeems recently:

For つばさ文庫, start with one novel and see how things go. After all they are aimed for kids and might be a bit dry… I strongly recommend going on Bookwalker or any digital store and trying out the sample before spending any money on them.

For つばさ文庫, initially I read ずっと前から好きでした. Its part of a project by HoneyWorks ( 告白実行委員会〜恋愛シリーズ ) . There is an anime (“Our love has always been 10 centimeters apart”) , two movies and two books . I saw part of the anime, which is lightly connected and thought why not try that book. I probably looked up most words and unknown kanji.

For Mirai (未来のミライ) and Summer Wars. I tried to look up only the repeating unknown words, not everything. That way at least its easier to get invested into the story by not stopping all the time hehe…. After I watched the movie (with English subs). Just to see if I understood things correctly.

Sometimes, I don’t look up any words and just try to understand from context and not worry about it. For 2/3 light novels, I actually re-read them a few months later as I found it helpful to better understand things.

For digital flashcards…. This may sound strange: “Do you really need them? What do you want to gain from digital flashcards”. It seems like your study methodology is already good enough… Probably getting something like Kanzen Master JLPT N3 for vocab / kanji can work just as well….

Bunpro’s vocab decks are already in beta, hopefully they will be released officially soon

Also there are some fancy new graphs added by @sweetbeems recently:

Oh so glad you’re enjoying! You are one of the few that tracks all their time spent @Megumin and it allows very cool charts. Hopefully more are inspired to track their time, now that I think it’s easy to do and valuable!

I’m not sure you noticed, but on the general stats page you can also see your hours timed as an aggregate over weeks / months like all the other aggregates. I haven’t implemented all your other requests, but someday…

This is so cool! I’m definitely going to try Learn Natively!

Thank you for your tips! I actually found a book that piqued my interest - 夏へのトンネル、さよならの出口.

Oh so glad you’re enjoying! You are one of the few that tracks all their time spent @Megumin and it allows very cool charts. Hopefully more are inspired to track their time, now that I think it’s easy to do and valuable!

I’m not sure it makes obvious for a lot of users that tracking time has benefits on the site, as it hides some of the charts/stats afaik.

One example, the chart of reading speed doesn’t display at all if there’s no time input.

Heh, yes you’re right. I guess I’m a wary of being ‘pushy’ if someone doesn’t want to use something. I could certainly be more encouraging… but I rather someone be surprised by functionality than be annoyed by unused functionality

I know the feeling as I used to run a very high traffic website.

But there could be subtle ways of doing it. Like hovering over a user that has read a book, would display a tooltip with their reading speed graph.

Is just that it’s a shame that it’s not used that much and also I the fear of not being developed further or abandoned because it’s not popular.

You are right that’s a reasonable fear.

However, take comfort in the fact that I view it as a pretty large distinguishing factor from other reading tracking services, especially for learners. One of the main selling points of tracking your reading on Natively is to monitor and realize your progress you make when you’re in the intermediate/advanced language learning phase.

Natively distinguishes itself by showcasing that progress through difficulty and, if you want it, reading speed.

So even if it never becomes super popular, I think it’s a big selling point and distinguishing factor against all the other reading trackers out there.

But yes, agreed I’d love to surface other readers reading speed on a per book basis… definitely in the plans. Those charts are too cool not to surface!

Hey! It’s been a week since I started this log and I think it’s time for a weekly update.

I found a nice tracking template on a Japanese discord server which I’m currently using to track my overall Japanese immersion time. Pairing this with Learn Natively recommended by @Megumin, I think I’ve got myself a pretty good tracking system! 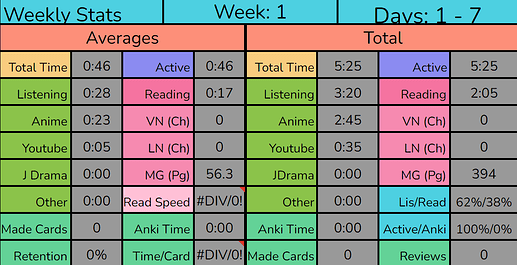 I found a new vocabulary system - jpdb.io. It’s really amazing since I can just copy and paste my anime subtitles and they will generate a vocabulary list. I’ve also been keeping up with my daily Bunpro everyday.

Thanks for reading and have a great day ahead!

Hmm ok! Thanks for the tips