In the past, it has not been often that we’ve been able to incorporate major changes into the website. A few grammar points here, a little tweak of the UI there. However, as we are sure that you all have noticed, the team has expanded this year, allowing us to take on some pretty large projects (many of them still to come).

We would like to take this opportunity to introduce our first major leap into becoming a more ‘consolidated’ source of Japanese learning. 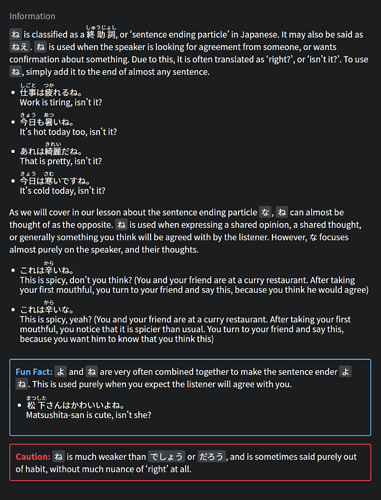 The team has recently been working on all of the N5 grammar, preparing explanations for them that fit our philosophy of simplifying Japanese grammar and making it more bite sized. We think these writeups will give people a much firmer understanding of the different grammar structures. Here is a breakdown of our approach in the writeups:

At Bunpro, we have some of the most enthusiastic people about Japanese on our team. Enthusiastic as teachers of the language, but equally as enthusiastic as learners of the language themselves! We think that one of the most important things when learning anything, is that the people that are guiding your progress are equally as excited as you are. We hope that some of this positivity/interest shines through in our explanations!

Traditionally, the western focus on teaching Japanese has been with ‘giving an English equivalent’. While we still do this, we have also attempted to give ‘direct translations’, or ‘literal meanings’ as often as possible. Our goal here is to (very slowly) teach you how to understand grammar purely from the Japanese perspective, so that you can make better mental connections between similar grammar points.

We are aiming to do this for all of N5, N4, N3, N2, and N1, and will release each N-level as soon as we can after the previous one (without sacrificing any quality for speed). Eventually, we would also like to link some of the terminology in these writeups to a more structured blog type post. For example, when we mention 形容詞（けいようし）(い-adjective), eventually we want to have an article we can link to that explains what a 形容詞 is! (with all of the fine and nitty-gritty information that you could ever possibly need). We aim to do this for all of the Japanese word types.

These initial writeups are part 1 of a 3-part system that we hope to introduce in the near future. These first explanations are what we would like to call Bun-know. Here is how it will work.

Part 1 : Bun-know
These explanations will include everything that you need in order to use the grammar point effectively, from day 1. They will be the ‘bread and butter’ foundation knowledge (with a few extra ingredients thrown in just to keep it interesting!).

Part 2 : Bun-grow
These explanations will introduce finer nuanced information about each grammar point, and also compare similar grammar structures. Comparing nuance differences is a great way to help solidify meanings/when to use things. So we will focus on this in Bun-grow, to increase your confidence with each point.

Part 3 : Bun-flow
This final stage of content development will focus on the extremely fine detail things. Conceptual information, historical information, and lots of other things that you will want to come back to and examine again as an advanced learner.

Last but not least!

We have majorly reordered the learning order of N5!

When rearranging, our goal was to have everything in the most logical order possible, while thinking equally about the new grammar explanations, and also when you simply ‘need’ certain grammar points to make natural sentences.

Let’s take a look at the reordering, and the goal of each lesson in N5!

We really hope that you guys love this addition to the website, and that it builds your confidence in us as a learning resource. As always, we would love to hear any and all feedback, and hope that you all have an absolutely rockin’ day!

While we still do this, we have also attempted to give ‘direct translations’, or ‘literal meanings’ as often as possible. Our goal here is to (very slowly) teach you how to understand grammar purely from the Japanese perspective, so that you can make better mental connections between similar grammar points.

Thank you!!! That’s my favorite thing about the channel “Cure Dolly”, especially for someone whose first language is not english

Bunpro has come a long way and I’ve been only subscribed for nearly one year!

Always good to have more Bun to turn us into Pros!

Very well done. I also look forward to your high-level explanations of Japanese. Perhaps you could branch out into stuff not covered by the JLPT, including but not limited to dialects, slang/extended casual speech, or classical Japanese?

looking forward to the roll-out to the grammar points I’m working on… one thing that I’m finding hard is the overlap, there are a lot of separate points covering ‘like’ in early N4… differentiating them is hard.

This is awesome, the temptation to reset and start N5 again is strong…

Right-o, another reason to reset

An absolutely wonderful addition! Big props to the team!!!

Now I don’t have to say the “you still need a grammar book/textbook” part anymore when I recommend bunpro.

… but mildly annoying that only one typo can be reported at a time. Now I have to keep Past い-Adjective | Japanese Grammar SRS open in a tab until tomorrow to find out if the other person only found the extra bullet point, or the error in the furigana…

Thanks for reporting this so fast! The formatting error has been fixed. It looks like this was a HTML error. We appreciate you notifying us so soon after release as well.

I couldn’t actually see any furigana errors though… Unless I am blind (This is a possibility). Which one were you talking about?

We are really glad to hear that! Not everyone was a fan of Curedolly, but she tackled a lot of very difficult concepts that many sources/textbooks don’t mention. If we are able to capture even 15% of Curedolly’s enthusiasm for Japanese in our writeups, It will definitely be considered a great success!

It looks like someone corrected it, when I looked at it the example お

I considered it a furigana error because the translation is “lukewarm”, so now it’s a translation error instead.

Ah I see, looks like somebody else was quick to fix it then! As for lukewarm, I just changed it to warm

Loving it. The feel of progression of this tool is amazing.

Very looking forward to an additional learning methodology. Maybe it becomes the ultimate one?

Ahhh this is awesome! It has me so excited for new learners too! I would have LOVED this resource when I was younger. (I still love it now, but, you know xD)

Super excited to see this expansion, can’t wait to see the other levels, but I’ll also be super patient since I want y’all to have as much time as you need with it. <3

Stickers/Merch next? I still want to throw more money at y’all and rep y’alls brand

Big props to the Content Team. You guys have absolutely rocked it.

This is exactly what I have been wanting from Bunpro (a one stop shop). I am so happy and thankful you all are working hard to make that a reality!

Adios Tae Kim, it was nice while it lasted but there’s a new king in town

This all looks great

Now I’ll have to redo N5 to see the new explanations.