みたいな is the adjective form (it is used to modify nouns)
みたいに is the adverbial form (it is used to modify adjectives, verbs, and other adverbs)
みたい(だ) is the predicative form used at the end of a sentence.
みたいに(and ように) is used in general to show the similarity of something to something else in appearance or in a manner of doing something.
みたい（and ようだ） also has this use + conjecture(possibility of something) (Feedback - Suggested Improvements/Feature Request)

In the the example:

What is みたい attaching to such that it adds the に connector rather than the な？
The Seemingly obvious answer is that it is 日本語 but then is should be な as that is the noun connector, yet it is not. Is it because it is a dangling phrase or that みたいに is the nutreal conncetor? any help would be appreciated.

Hey! Sorry for the late reply!

When you add に to なAdjective it will work like an adverb (adverbs can modify adjectives, adverbs and verbs).

In this sentence, you have a noun 日本語 and verb 教える with auxiliary adjective たい to modify.

But teaching Japanese (language) in the manner (like) as Koichi does makes one and that is what the speaker wants to express.

Is it clear now?

Yeah I think that clears it up, I will just have to see in through a few more reviews for it to sink in.

For this item, the grammar point makes a distinction between 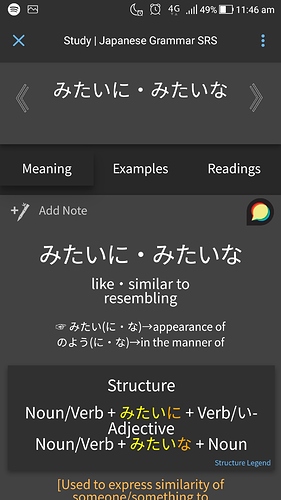 This says that みたい is about appearance, while のよう means in the manner of.

However, I have been looking at the example sentences, and am seeing more のよう sentences than みたい sentences, so I think I’m not understanding the grammar point correctly yet. 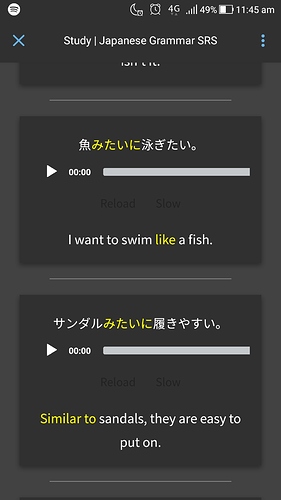 For example, to swim like a fish (in appearance) would mean that one would swim, looking like they were a fish, as if they were dressed like a fish, rather than swimming like how a fish would swim.

What am misunderstanding here?

We had a discussion the other day about this. Hopefully this will connect the two threads

ーいう only applies to nouns and usually starts a sentence. You see all the sentence with this/that/that over there/which kind have this in the beginning. If you know the very practical phrase どういう意味ですか, everything else falls into place for the KSAD forms I think よう and みたい are more interchangeable than BP allows (I believe BP is still marking it wrong instead of asking for another meaning). Since they can be both adjective/adverbial and modify noun phrases, there is a of ton flexibility. My teach…

So am I correct in understanding from your post that this distinction is too strict?

I reached out to a native for this one as there seems to be a lot of subtleties and they agreed with the BP slight distinction that みたい can a bit more visual while のよう leans towards characteristic (along with colloquial vs. more written difference). Therefore the distinction of “appearance of” and “manner of” work out well for specific instances but not confined to these meanings.

But I believe when used for meanings of “like” or “similar to” (probably the majority of the time), they are interchangeable. I could not get a distinct answer when not use “x” but must use “y” and my teacher also gave the green light to interchange them. The Maggie Sensei entry for みたい and のよう didn’t throw any exceptions either from what I skimmed with many interchangeable examples. Looks like there are times when みたい can overlap with into “seems like” or “heard” for そう・らしい a bit more though. Contrary, I could see how のよう could have more conceptual applications or be written for instruction manuals or something.

For the sentences you mention above, I see no difference in interchanging them as both based on direct information.

Hey! Sorry for the slow response

I have removed that part, it was an error. みたい and よう, as you said are basically identical. The よう being more formal, and よう having some other uses like “so that”, ように祈る、ようになる、ようにする where みたい doesn’t work.

It should be something like:
みたいな、ような -> appearance of (modifying nouns)
みたいに、ように -> in the manner of (modifying adverbs, adjectives, verbs)

I am really sorry for the inconvenience it caused!

What is the difference between the two?

みたいに(and ように) is used in general to show the similarity of something to something else in appearance or in a manner of doing something.

Thank you. It might be a good idea to add that to their respective pages.

The discussion link from みたいに should probably link here. Currently it takes to a topic on てすみません.

I will do something about it!

PS
Your avatar is actually amazing >.<

Couldn’t this sentence be also taken as “I want to be like that woman”?

Hey and welcome on the community forums

てほしい is only used for what we wish/demand from other people.

So:
(あなたに)この女みたいになってほしい
I want you to become like that woman.

If you want to speak about your own wishes you have to use: たい or Nounがほしい

I hope it helps and if you have more questions feel free to ask,
Cheers

PS
This is a bit more advanced, but interesting. てほしい is also used when we wish for some events (that are beyond speaker will) to happen, like:

I see, thank you!

On the main page for this it says you can get the structure Verb + みたいに, but there aren’t any examples of this form, as far as I can tell. What would that construction be used for? Would it be used to say something like “His walking is like running for other people”?